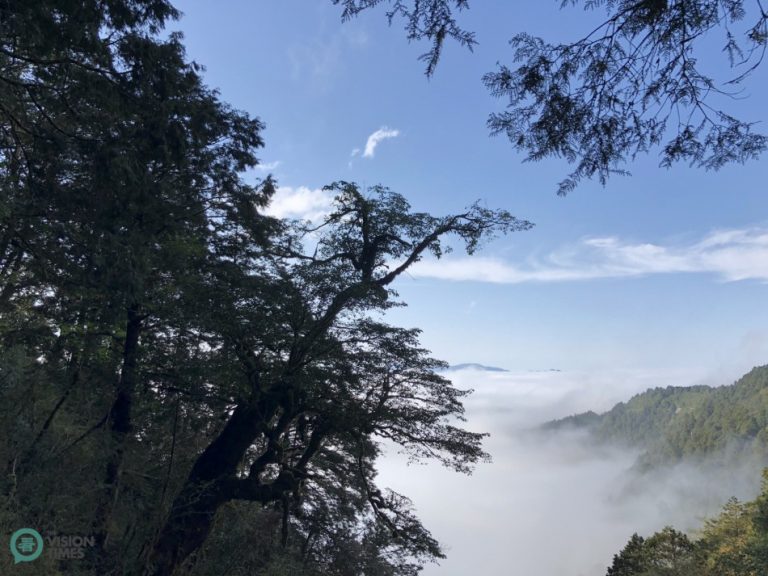 The largest high mountain lake in Taiwan, Cueifong Lake (翠峰湖), is situated in Taipingshan National Forest Recreation Area (太平山國家森林遊樂區) between Taipingshan (太平山) and Tayuan Mountain (大元山) in northern Taiwan. At an elevation of 1,840 meters, the area of the lake can spread to 25 hectares during the rainy season from September to November.

During the dry season from January to April, Cueifong Lake is divided into two sections that resemble a calabash gourd (葫蘆), as the bottom section is connected to a smaller upper section by a narrow neck.

Some local people call the two sections of the lake two girls, Xiao Cuei (小翠) and Xiao Fong (小峰), who are holding each other’s hands in the water. Many also refer to Cueifong Lake as a shy girl in the mist because it is often covered by a thick fog.

Amazing trails around the mountain lake

In addition to the spectacular lake, another striking feature of Cueifong Lake is its amazing trails. Cueifong Lake Circular Trail (翠峰環山步道) is built upon the abandoned tracks of a forest railway on the north side of the lake and extends to the Pingyuan Nature Trail (平元自然步道) on the east side of the lake.

With a total length of 3.95 km and an elevation of some 2,000 meters, Cueifong Lake Circular Trail is a great place to appreciate the different views of Cueifong Lake during the four seasons. To minimize the impact on the local ecosystem, the trail was constructed with a nature-respecting ecological engineering method, thus preserving its pristine appearance.

Moreover, there are three elevated wooden lake scenery platforms along the trail that allow visitors to take in the grandeur of Cueifong Lake and the beauty of the surrounding scenery. Besides a wide variety of plants, flowers, and tree species, such as Taiwan cypress and white wood, the tail also abounds with mosses on the trees and ground. In addition to the stunning landscape along the trail, visitors can also enjoy the fresh air full of phytoncides (芬多精) and anions (負離子) emitted from the plants and trees.

The Jiancing Historic Trail (見晴懷古步道) was built along the abandoned logging railway, the Jiancing Line of the Forest Railway. Though it has been abandoned for decades, it still retains its natural beauty and historical heritage, including the tracks, wooden log cart, and bogies.

There are also two rope bridges on the trail, which are great locations for photography. The Jiancing Historic Trail was cited as one of the most magnificent abandoned places by the websites World of Surfing and the Architecture & Design in 2014, respectively.

The Jiancing Historic Trail is an excellent vista point to view the ridges of Hsuehshan (雪山), Taoshan (桃山), Dabajianshan (大霸尖山), and Shengling (聖稜線 Holy Ridgeline). It is also an excellent place to view the magnificent sea of clouds. However, only 0.9 km out of its total length of 2.35 km is opened to the public due to a landslide in 2013.

Cueifong Lake and its surrounding trails are definitely a go-to destination for those who aspire to embrace nature and outdoor recreation. It is also a place that visitors can invoke the memory of the logging industry in Taiwan.