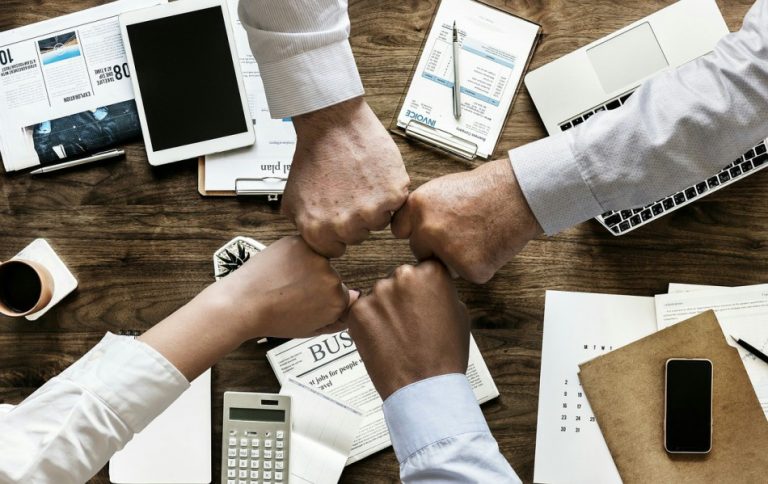 An archeological dig in Italy reveals that prehistoric humans made it through a major natural disaster by cooperating with each other. (Image: via pixabay / CC0 1.0)

Trade and social networking helped our Homo sapiens prehistoric humans survive a climate-changing volcanic eruption 40,000 years ago, giving hope that we will be able to ride out global warming by staying interconnected, a new study suggests.

Analyzing ancient tools and ornaments from a prehistoric rock shelter called Riparo Bombrini, in Liguria on the Italian Riviera, archaeologists at Université de Montréal and the University of Genoa conclude that the key to survival is cooperation.

Their study was published in early April in the Journal of Quaternary Science. Julien Riel-Salvatore, a professor of archaeology at UdeM who co-authored the study with his Italian colleague Fabio Negrino, said:

“Liguria is where some of the first Homo sapiens, more or less our direct ancestors, lived in Europe.

“They came after the Neanderthals, and unlike them, when they were faced with sudden changes in their climate they didn’t go locally extinct or abandon the region – they adapted.”

Homo sapiens had been living in the region for over 1,000 years when a “super-eruption” in the Phlegraean Fields in southern Italy, west of present-day Naples, devastated much of Europe.

“It used to be thought that this wiped out most of the early Homo sapiens in Europe, but we’ve been able to show that some were able to deal with the situation just fine. They survived by dealing with the uncertainty of sudden change.”

In their work, the archaeologists gathered tool fragments such as bladelets — small regular flakes knocked off larger stone cores to use as barbs and slicing components of weapons for hunting — that showed the ingenuity of our early ancestors.

Some of the flint they used was brought in from hundreds of kilometers away, indicating a very extensive social and trading network that helped them survive for the next 4,000 years.

Riel-Salvatore, whose evidence to show that Homo sapiens occupied the site also includes a child’s tooth, as well as shell and soft stone ornaments, said:

“They had a link to people living far away, so that if things went haywire in the territory where they lived, they had the social option of depending on people they’d built relationships with — the broader the network, the easier it was to survive.”

His study echoes other revisions of the impact of an even older prehistoric volcanic super-eruption, that of Mount Toba on the Indonesian island of Sumatra 74,000 years ago that was once thought to have come close to wiping out humanity entirely, a theory now seriously challenged by recent evidence.

In both cases, archaeology has shown that evolution isn’t always as dramatic as we think, Riel-Salvatore said in a statement:

“This seems to be part of a pattern where humans are more adaptable and more resilient in the face of these enormously disruptive events. These events can be really terrible, but in a limited way, not across continents or globally.

It’s a bit of a leap to say that what happened tens of thousands of years ago can help predict how humans today will cope with climate change, but learning from the past does help situate us for how we deal with ongoing climatic change.

“It underscores the importance of archaeology in being able to inform the more immediate issues we face. Cooperation and resilient social networks were really key in helping people ride out dramatic climate change in the past.

“And considering some of the challenges we’re facing nowadays, and some of the entrenched positions we have to deal with, maybe this notion that cooperation is fundamental is something we can communicate as a take-home lesson.”

The bulk of the data the researchers gathered for their study was excavated between 2002 and 2005 from Riparo Bombrini, a part of the Balzi Rossi archaeological complex of Paleolithic caves that were first probed in 1938 and where excavations began in 1976.

Over the next three years, Riel-Salvatore and Negrino will continue excavations at the site to delve further into why the Neanderthal population there disappeared and was replaced by the better-equipped — and better-connected — Homo sapiens.

Provided by: University of Montreal [Note: Materials may be edited for content and length.]