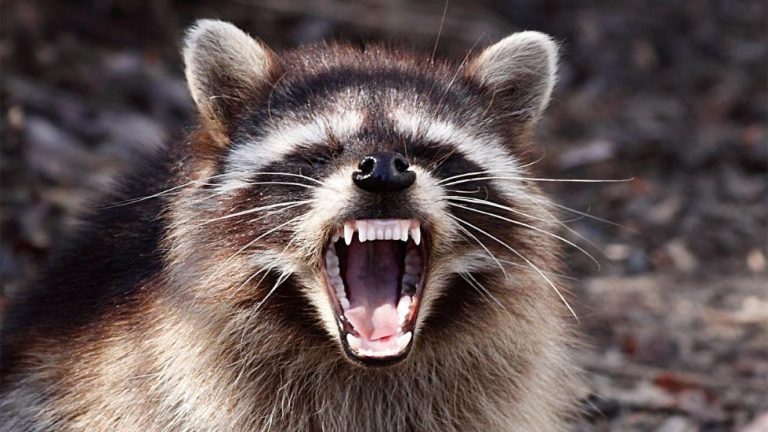 The residents of Youngstown, Ohio, have been terrified by raccoons that seem to have infested the town, displaying zombie-like behavior. Many people have reported witnessing these zombie raccoons and have reported them to the police, being quite afraid of them.

Well, the residents report that these nocturnal animals are seen out in the open during daylight. It is surprising because raccoons are rarely seen during the day.

Additionally, they are walking on their hind legs instead of all fours, and seem to be out of sorts. These zombie raccoons are frightening the folks because they are also baring their teeth and appear aggressive to the residents.

Robert Coggeshall, a wildlife photographer based in Youngstown, was out playing with his dogs when he first spotted one of these zombie raccoons.

He stated that the raccoon followed him to his home and stayed outside the house while Coggeshall and his dogs looked at him through the glass door. Even after making several attempts to frighten the raccoon, the raccoon didn’t budge.

Coggeshall also mentioned that the infected raccoon would fall over and appear unconscious after standing on its hind legs and baring its teeth. The raccoon would then get up and start the bizarre routine again.

According to the Ohio Department of Natural Resources, the so-called zombie raccoons have most likely contracted distemper disease. They are not zombies and certainly not out for human brains!

According to the American Veterinary Medical Association, distemper harms the respiratory, gastrointestinal, and nervous systems of the animal.

Since the disease affects the nervous system, raccoons behave differently and appear to go around in circles with their heads tilted, displaying continuous jaw movements, and are also unable to control the saliva dripping from their mouths.

Additionally, it makes them fearless to any external stimuli. Unfortunately, there is no cure for the infected raccoons. These raccoons need to be captured to ensure that the disease doesn’t spread. The raccoons can only be euthanized to end their pain.

This viral disease is capable of wiping out significant numbers of a population, especially with regard to the raccoons. However, as it spreads, the raccoons become less susceptible to it and the least susceptible of all are able to drive the disease away and rebuild the population.

One report suggests that, in a large or concentrated population, the disease can run a cycle of five to seven years. The disease spreads when an animal comes in contact with the fluids or discharges of an infected animal.

While the symptoms are rather frightening, the raccoons don’t turn into zombies and they are certainly not out for human brains.

Take care of your pets!

This disease cannot be passed on to humans; however, it is dangerous for pets. Pet owners need to ensure that their pets are not kept out in the open where they can easily come in contact with such raccoons.

Symptoms of dogs that may have been infected include watery or close to pus discharge from the eyes, fever, lack of appetite and energy, and nausea.

If the disease advances, dogs, too, will exhibit the same circling movements as the raccoons. There is a vaccination available to prevent the disease in dogs.