Hot Springs and Desserts for a Long Life 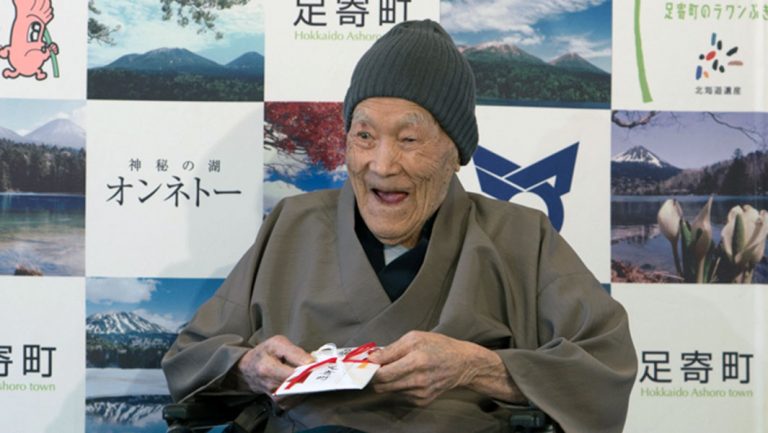 Masazo Nonaka from Hokkaido, Japan, has been declared by Guinness World Records as the oldest living man in the world as at 2019 (image: via Gerontology Wiki)

Masazo Nonaka from Hokkaido, Japan, has been declared by Guinness World Records as the oldest living man in the world. He is currently 112 years old.

Masazo received the award and certificate for his incredible record from Erika Ogawa, the V.P. Japan of Guinness World Records, on April 10, 2018. Erika visited Masazo and presented the certificate at his home in Ashoro, located on Japan’s main northern island, Hokkaido. Extensive research had been conducted by Guinness World Records under Robert Young, their Senior Consultant for gerontology, to find evidence and confirm Masazo’s record. There are about 67,800 centenarians in Japan with very high life expectancies.

His predecessor was Francisco Nuñez Olivera from Spain, who achieved the record of the oldest living person (male) before his death on January 29, 2018 at the age of 113.

According to his granddaughter, Yuko Nonaka, Masazo requires a wheelchair to move around, but does it on his own and is still in good condition. He has outlived his wife, his six brothers, one sister, and even two of his five children.

Masazo’s family has been running a bed and breakfast inn in Hokkaido by its famous hot springs. Masazo took care of the inn for most of his life and has passed it down to his granddaughter.

He was born on July 25, 1905; this is only a few months before Albert Einstein published his theory of special relativity. To put this into perspective, he has even lived through both world wars.

How has he done it?

Retired, Masazo spends his day watching sumo wrestling on TV and reading, especially the newspaper, to keep him busy and updated. He is a family man and loves to spend time with his family and his cats, Kuro and Haru. Like every old grandpa, Masazo is known to sneak some food on his plate to the cats if he is unable to finish it.

However, most of all, he loves to eat desserts — Japanese and Western desserts. He loves any type of sweet, but his favorite is a strawberry sponge cake. He needs his filling of sweets every day and will never say “no” to them, no matter the desert and no matter when.

He also knows how to avoid stress. Unlike many, he knows to say “no” if and when there is something he doesn’t want to do. He doesn’t shy away from the word and is also comfortable to tell everyone about it. Here’s a lesson for all — when there’s something you don’t want to do, it’s not always necessary to put yourself through the stress of it all. You should learn to communicate well and to find a solution that is mutually beneficial, making sure that neither party, unwillingly and unnecessarily, struggles to get the job done.

Additionally, his family believes that the hot springs at Hokkaido have contributed to his healthy and long life. Regularly soaking in the hot springs is a unique feature of Masazo’s life and must surely impact his chances of longevity.

To celebrate his record, Masazo was presented with a large cake to which his response was “yum.” Truly a stress-free man, and one who knows exactly how to express what he feels and wants without even using too many words! He also posed in a family photo with the victory sign.