Know Your Chowders: Maine vs. Boston 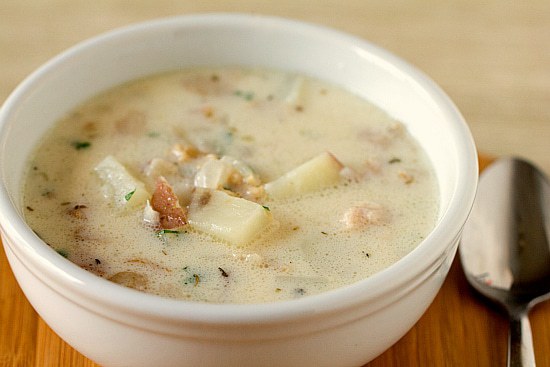 Anyone who still knows how to make a proper chowder needs to seize the moment with the next susceptible young person they meet up with and teach the art before we forget what a traditional chowderF. (Image: ShashiBellamkonda via flickr CC BY 2.0 )

I have groaned aloud deploring the state of modern chowder making. Being from coastal Maine, I know of what I speak and have appealed to anyone who still knows how to make a proper chowder that they seize the moment with the next susceptible young person they meet up with and teach the art before we forget what a traditional chowder is.

Most people are familiar with the Boston “Chowda,” which can only be described as a cream-laden concoction with the consistency of a thick glue in its worst forms.

On the other hand, Maine or New England chowder is a rich, flavorful, thick-with-ingredients (not cream) chowder that is a Mainer’s birthright, or at least ought to be. I am convinced that in all likelihood, chowder was the first dish concocted in Maine by non-natives, very likely by the same European fishermen who brought codfish caught and salted on the Grand Banks ashore to dry in Maine fishing stations along the coast.

Chowder, like many dishes, has variations on its basic structure. Clam chowder traditionally begins with salt pork, dried out to make fat on which cooks layer onions, potatoes, clams, then add water and finally milk.

The kind and quality of the ingredients make the difference in chowder flavor, and personal taste is a guiding principle. For instance, I like it when the potato cooks apart a little and helps thicken the chowder. Others like to use a waxier potato cut into cubes, cooked so each is a bit independent of the rest of the ingredients.

For routine family chowder, I use evaporated milk to finish. Others might prefer light cream or half and half or even merely milk. Some cooks add herbs to chowder, but I am a salt-and-pepper-only cook.

Everyone assumes that chowder is thick and it is here that the whole proposition goes awry. Two hundred years ago, and for a while even after potatoes were included universally in chowder, common crackers soaked in milk and laid in with the fish helped thicken it up. While the crackers might cook apart a little, the result was chowder densely packed with ingredients, but not thick and gluey. Some recipes, even ones from the 1800s, call upon the cook to sprinkle a little flour into the pot over a layer of fish or potato. The better chowders assiduously avoid a gravy or sauce like consistency, which is so common with the Boston version. In contrast, a Maine chowder is a brothy, milky soup full of fish, potatoes, and onions.

The following is not so much a recipe as a set of flexible guidelines for building a clam chowder. When you eat good chowder at a friend’s or relative’s house, inquire about the method they use, and see if there is not some little trick you can pick up to add to your method.

My basic clam chowder is built with one medium potato per person, plus a third of a pound or so of shucked claims per person, and one medium onion for every two people. A small piece of salt pork, about an inch square, finely chopped, per person is sufficient, or a tablespoon of oil or sometimes bacon fat. The fat from pork or bacon gives a nice flavor, which is why I prefer it.

Some like to cube potatoes, but I belong to the slicing school of thought, and I usually slice the potato so that I have a thin edge and a thick one. The thin edge cooks off and helps thicken the chowder. This recipe yields 3 servings.

Note that chowder is usually better if it stands overnight in the fridge and is eaten the next day.