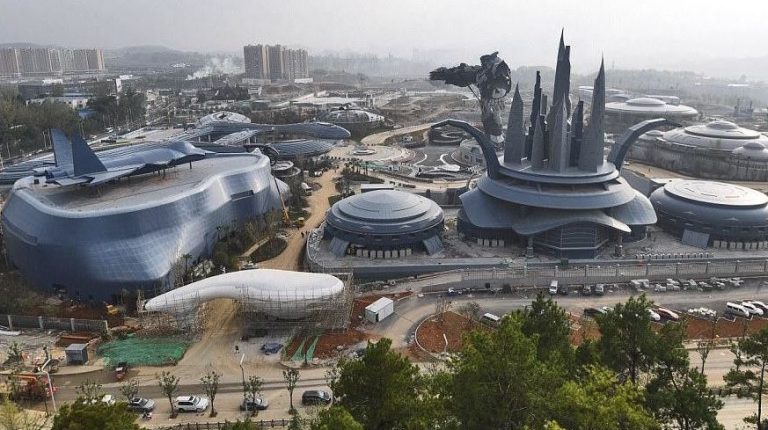 The Oriental Science Fiction Valley theme park, located in Guizhou Province, is an amusement park that consists of only VR rides and entertainment. (Image: Screenshot via YouTube)

China has come up with a fun way to utilize its advancements in virtual reality. The Oriental Science Fiction Valley theme park, located in Guizhou Province, is an amusement park that consists of only virtual reality rides and entertainment. This park is massive, about 330 acres, and the entire theme is based on the wonders of science fiction; it is definitely the first of its kind. The park opened to the public on April 29, 2018.

Think of Disneyland, only the castles and towers are filled with robots and have a futuristic space-like feel to them. The park has 35 virtual reality rides, roller coasters, simulation, and shooting games. The park’s theme has been designed to offer its customers something unique.

According to the park’s CEO, Chen Jianli: “There’s fierce competition in the theme park market right now. We are trying to give customers a new experience by combining modern technologies, such as virtual reality and augmented reality (AR), with traditional recreational facilities.”

The total project cost is approximately $470 million, and it’s a joint venture between Guizhou Province and Shuimu Animation (Shenzhen-based Oriental Times Network Media). Jianli further adds: “The sci-fi part of it is important for the feeling it creates.”

This theme park incorporates virtual reality throughout the park

Themed park rides based on futuristic designs have become quite common across the world; however, this park is different because it skillfully incorporates virtual reality throughout the park. Other parks generally only tend to have a ride or two based on virtual reality, certainly not the entire park. Some of the features of this park are bungee jumping off the arm of a huge 53-meter tall robot, virtual reality movies, and rides and roller coasters with virtual reality eyewear complete with full body motions and thrills. The massive statue, weighing about 700 tons, will definitely become an iconic landmark in the area.

Another interesting aspect of this park is its location. It is based in China’s southwestern region, which is largely a poor area. Officials are of the opinion that setting up such a unique park in this location will help to attract tourists to the area. This will also create more jobs for the locals and help generate a technology buzz in the region. The makers of this park want to use virtual reality and high technology to help develop the region of Guizhou. The area is already set to be the data warehouse of Apple’s iCloud data in China and is also the location of the world’s largest radio telescope.

Jianli wants the park and its immersive experience to help people learn about the applications of virtual reality and its possible future. The CEO hopes for the park to generate awareness and positivity about the advancements in technology in the mind of the public. The success of this park could also help accelerate China’s virtual reality market, which is expected to have a tenfold growth of $8.5 billion by 2020. While some, especially farmers, are concerned about the increase in pollution because of the vast construction, most are positive and curious about the virtual reality applications in roller coasters and rides.

On a lighter note, the park really wants to offer a unique, thrilling, and entertaining experience for its customers. According to Qu Zhongjie, the park’s ride manager: “You feel like you’re really there; that’s our main feature.”