How Can I Help My Child to Succeed at School? A New Study Tells All 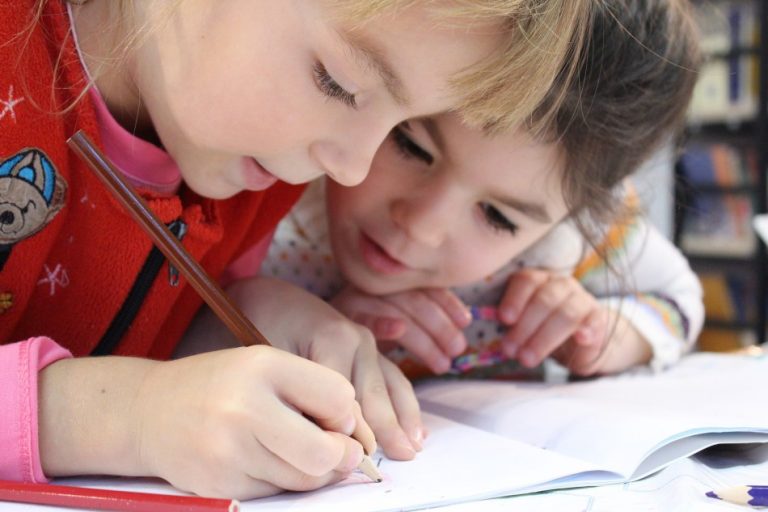 Research shows that the more skills children bring with them to kindergarten — in basic math, reading, and even friendship and cooperation — the more likely they will succeed at school in those same areas. Hence, “kindergarten readiness” is the goal of many preschool programs and a motivator for many parents.

Now, it’s time to add language to that mix of skills, says a new University of Washington-led study. Not only does a child’s use of vocabulary and grammar predict future proficiency with the spoken and written word, but it also affects performance in other subject areas.

Having a strong language background helps children succeed at school

Language, in other words, supports academic and social success, says Amy Pace, an assistant professor in the UW Department of Speech and Hearing Sciences:

“A lot of other research focuses on math, science, and literacy, and they don’t even consider that language could be playing a role.

“But really, it emerges as a strong predictor across subject areas. Why do kids succeed in math, for example? Part of it could be having a strong math vocabulary.”

The study was the first to look at a comprehensive set of school readiness skills and to try to determine which, of all of them, is the most solid predictor of a child’s later success. Language — the ability to fluidly learn words and to string them together into sentences — was the hands-down winner, said co-author Kathy Hirsh-Pasek, director of the Infant Language Laboratory at Temple University.

For this study, published online on April 30 in Early Childhood Research Quarterly, Pace and her colleagues from Temple University, the University of Delaware, and the University of North Carolina examined longitudinal data from more than 1,200 children in the National Institute of Child Health & Human Development’s Study of Early Child Care and Youth Development.

That study used several measures of academic and social skills at specific ages and grade levels, including evaluations upon entry to kindergarten and in grades 1, 3, and 5. While there is considerable research on how children develop specific skills over time, much of that research is focused on patterns of learning within a single subject area, like math or reading.

Researchers in the UW study wanted to determine whether there are relationships between skills when considered in combination, and to think about how these combined abilities might predict gains, or growth, above what might be expected based on the skills the child demonstrates when they first enter the kindergarten classroom.

The team analyzed academic and behavioral assessments, assigned standardized scores, and looked at how scores correlated in grades 1, 3, and 5. Growth curve modeling allowed the team to look at children’s levels of performance across time and investigate rates of change at specific times in elementary school.

Researchers found that of the skills and milestones evaluated — social/emotional, attention, health, reading, math, and language — only language skills, when a child entered school, predicted his or her performance both within that subject area and most others (math, reading, and social skills) from first through fifth grade.

Reading ability in kindergarten predicted reading, math, and language skills later on; and math proficiency correlated with math and reading performance over time. People often confuse language with literacy, Pace said. Reading skills include the ability to decode letter and sound combinations to pronounce words, and to comprehend word meanings and contexts.

Language is the ability to deploy those words and use complex syntax and grammar to communicate in speech and writing. And that’s why it has such potential to affect other areas of development, Pace said. At a time when so much focus is on math and science education, language also deserves attention:

“It provides a foundation for social interaction. If you’re stronger in language, you will be able to communicate with peers and teachers.

“Language also relates to executive functioning, the ability to understand and follow through on the four-step directions from the teacher. And it helps solve problems in math and science, because understanding terminology and abstract concepts relies on a knowledge of language.”

Measuring the impact of one skill on another, in addition to measuring growth in the same skill, provides more of a “whole child” perspective, Pace said. A child who enters school with little exposure to number sense or spatial concepts but with strong social skills may benefit from that emotional buffer.

“If we look at just a very narrow slice of a child’s ability, it may be predictive of ability in that area, but it’s not necessarily a good prognosticator of what’s to come overall for that child.”

Researchers expected to find that the effects of kindergarten readiness would wear off by third grade, the time when elementary school curriculum transitions from introducing foundational skills to helping students apply those skills as they delve deeper into content areas.

But according to the study, children’s performance in kindergarten continues to predict their performance in grades 3 through 5. This was consistent for multiple skill areas, including language, math, and reading, and suggests that bolstering children’s development in those first five years is essential for long-term academic success.

A few findings merit further study, Pace added, especially as they relate to educational policy. For example, children who entered kindergarten with higher levels of skills appeared to make fewer developmental and academic gains than those children who started at lower levels.

That is consistent with other research, but, Pace said, it’s worth examining how to better serve high-performing students. The study also represents an opportunity to rethink what skills are considered measures of kindergarten readiness. She added:

“Language ability at school entry consistently emerges as an important predictor of student outcomes. This may be why the first three to five years are so critical for future academic and social development.

“It is the child’s earliest, high-quality interactions with parents, teachers, and caregivers that promote a strong communication foundation — and this foundation goes on to serve as the bedrock for future language and learning.”

Provided by: University of Washington  [Note: Materials may be edited for content and length.]