The Best 3D Printers for Beginners 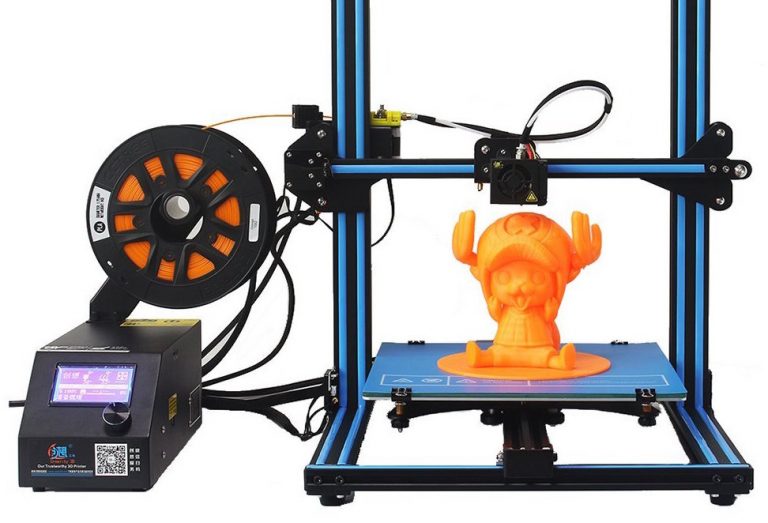 3D printing — or additive manufacturing, as it’s also called — is amazing. Provided you have the skills to design a blueprint file, or you have downloaded one online, you can create just about anything using 3D printers, from small things like phone stands or wire clips, to larger projects like Raspberry Pi cases or models of your favorite Star Wars droid.

But where do you start? There are so many different 3D printing models and sizes out there, what’s the best for an absolute beginner?

How do 3D printers work?

It helps to have a brief overview of how 3D printers work, especially if you intend to move on to more advanced machines and techniques later.

Additive manufacturing involves placing materials — called filaments — in layer-based configurations to make up a larger, more complete model. The printer moves from layer to layer, filling in the materials to create the object. Usually, those materials are ABS, hard plastic, or a similar form. You can also configure an industrial printer to work with more permanent materials like concrete, masonry, or fiberglass.

You can either build these designs yourself using standard design software, download them for free from a community marketplace, or buy them from professional developers.

Once you have the file, you import it to your printer, start the process, and you’re good to go. The material you choose determines the durability of your model and the ease with which the printer will handle it. More complex materials, especially as a beginner, can be more challenging to work with and often have higher rates of failure or error.

ABS and PLA filament types are the most common, the latter of which is the easiest and most reliable material for beginners.

For filament-based 3D printers like you will be working with, the most important component is the extruder, which helps lay out the material for the model. It ships the filament in use to the hot end of the system, which then gets passed on to the build plate. There are two styles: Bowden tubing or direct. Bowden tubing, a.k.a. a Bowden feed, tends to be more reliable. So just keep that in mind when looking over your printer options.

Tiertime 3D printers have some of the most features out of all on the market currently. Inside is a heated bed, as well as an enclosed printing space. The enclosure helps keep temperatures regulated, but it also protects the model from getting contaminated by dust, dirt, and pollutants. Users can also detach the print bed by sliding it out to easily remove printed models.

A touchscreen allows you to control the entire unit, with integrated Wi-Fi and USB for importing files and documents. Considering these 3D printers cost under $600, these features offer functionality that’s rare among comparable units.

It ships with proprietary software that’s simple and easy to use for beginners, which is different than its sister model, the Maker Select V2.

The Maker Select V2 is a budget-friendly printer that is also remarkably capable, with a heated print bed and a high printing volume. This printer offers a larger printing area to work with, which is excellent for those who want to print single, seamless models of varying sizes.

Using a microSD card, you can import models and designs to the printer, which negates the need for a connected computer.

The CR 10S comes semi-assembled so you don’t have to worry about putting the whole thing together when it arrives, just the bigger segments. Also, it’s incredibly easy to put together, perfect for anyone who is new to tinkering.

It’s designed to work with PLA, PETG, and ABS materials, mostly plastic. It does not have a closed chamber, nor does it have a removable bed, but it makes up for those shortcomings by offering a range of printing dimensions. You can print models 11.8 x 11.8 x 15.7 inches in size, or 300 x 300 x 400 mm.

For importing designs, you can use the standard USB or insert an SD card.

The Dremel Idea Builder 3D40 has a sleek design, so if you’re big on looks, this is the one for you. It’s also quite capable, especially when you first start out.

It only prints with PLA, which to some might seem like a drawback. However, when you first get started printing, you will probably have no idea which materials are best to use for which designs. PLA is one of the easiest to work with, which mitigates the risk of failure during a print. It also doesn’t require a high extruder temperature, and bonds quite well, so you won’t need a heated bed.

Despite this, the unit has a removable bed for easy model recovery, and a closed chamber for more even printing sessions. This model also offers assisted bed leveling, which makes it easier to get a project going, too.

It is a bit more expensive than the others, at a little over $1,100, so keep that in mind if you’re on a budget.

Anycubic’s i3 Mega is another printer that includes a touchscreen for less than $600. What makes this printer particularly valuable is that it includes an auto-resume feature that will restart a print right from where it left off in the event of a power failure. This feature is important, as most printers require you to reconfigure the session.

It does not have a removable bed, nor does it have a closed chamber, but it’s super easy to work with. You can import designs via USB and the SD card slot, making it plenty accessible for custom designs.

Not that this matters from a functional standpoint, but the overall aesthetic of the printer is quite bland, so if you’re looking for flashy, this isn’t it.

Which printer is best?

To be perfectly honest, which of the 3D printers you choose starting out doesn’t necessarily matter as much as it will later. Yes, you absolutely want to find something that is reliable and capable, but due to the varying price points and the growing number of options, this can be confusing and difficult. Rest assured, every printer on this list fits that bill.

You’ll be doing a lot of experimenting and playful prints when you first start out, which is exactly why it’s less crucial for you to have a top-of-the-line printer. With some experimentation, you’ll be a 3D printing pro in no time.