Find Shows Early Humans Were in the Philippines 700,000 Years Ago 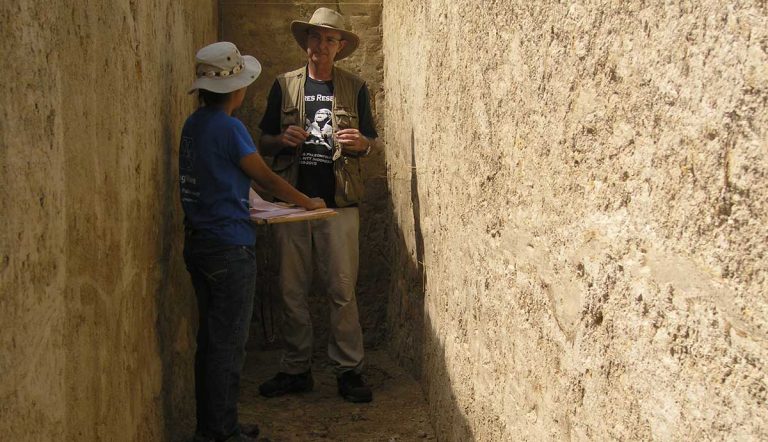 New archaeological evidence shows that humans were living in the Philippines by 709,000 years ago — hundreds of thousands of years earlier than previously thought. Stone artifacts were found by an international team of researchers, including Dr. Gerrit “Gert” van den Bergh, from University of Wollongong’s Centre for Archaeological Science, at an excavation at Kalinga on Luzon, the largest and most northerly island in the Philippines.

Their findings are published in the prestigious science journal Nature. Along with an almost complete rhinoceros skeleton, showing clear signs of having been butchered, the team unearthed 57 stone tools. These stone artifacts consist of 49 sharp-edged flakes, six cores (flaked stones used as the source material for the flakes), and two possible hammer stones.

Several of the rhino bones had cut marks and the left and right humerus bones showed signs of being hit with hammer stones, possibly to gain access to the marrow. Other fossils found at the site included stegodon (a relative of the elephant), Philippine brown deer, a freshwater turtle and monitor lizard remains. The fossils and stone tools were found in a clay bed dated to between 777,000 and 631,000 years ago.

This conclusion was reached by combining several dating methods (including Electron Spin Resonance, argon dating, and uranium series dating), confirming that the butchering of the rhino took place around 700,000 years ago. The find radically changes our understanding of hominin colonization of the Philippines; the earliest evidence of hominins in the area prior to this research was a small foot bone found in nearby Callao Cave and dated to 67,000 years ago.

It also calls for a rethink of how early hominins (all human species closely related to or directly ancestral to modern humans) spread throughout the islands of Southeast Asia. The paper’s authors argue that the find suggests the dispersal of premodern hominins through the region took place several times and that the Philippines may have played a central role.

Dr. van den Bergh, an Australian Research Council Future Fellow, said it was most likely that these early humans spread through Southeast Asian island from north to south — with Luzon as one of the stepping stones — following the ocean currents south and eventually reaching Flores to give rise to the ancestral population that led to Homo floresiensis (commonly known as the “Hobbit”), saying:

“Our hypothesis is that the ‘Hobbit’ ancestors came from the north, rather than travelling eastward through Java and Bali.”

Until recently, it was believed Luzon and the other islands of Wallacea (those islands east of the Wallace Line, separated from the rest of Asia and from Australia by deep water) could not have been reached by premodern hominins as it was assumed they didn’t have boats (islands west of the Wallace Line were joined to the mainland when sea levels were lower).

However, the discovery of the “Hobbit” fossils on the Indonesian island of Flores in 2003, and more recent discoveries on neighboring Sulawesi, show that hominins were in Wallacea from very early on. Recently uncovered evidence shows the Hobbit’s ancestors were on Flores by 700,000 years ago, around the same time hominins were present on Luzon.

Dr. van den Bergh, who is a palaeontologist as well as a sedimentologist (his analysis of the geological layering of the site was one of the methods used to date the artefacts found at Kalinga), said the dispersal of fauna through the Wallacean islands supports the theory of hominin colonization from the north, he said:

“If you look at the fossil and recent faunas, you see that there is an impoverishment as you go from north to south.

“On Luzon, you find fossils of stegodons, elephants, giant rats, rhino, deer, large reptiles, and a type of water buffalo. On Sulawesi, the fossil fauna is already impoverished; there’s no evidence of rhinos or deer ever entering there. Then on Flores, you only had stegodons, Komodo dragons, humans, and giant rats, that’s all.

“If animals did reach these islands by chance, by entering the sea and following the currents south, then you would expect the further south you go the fewer species you would find — and that’s what we see.”

While it’s possible, if unlikely, that the first human colonizers of the Philippines were able to construct simple rafts, Dr. van den Bergh believes they more likely arrived by accident, saying:

“They may have been caught in a tsunami and carried out to sea — those kinds of freak, random events are probably responsible for these movements of humans and animals. This region is tectonically active so tsunamis are common and there are big ones every hundred years or so.

“After the 2004 Indian Ocean tsunami, people were picked out of the sea 60 kilometers from the coast a week or so later, including a pregnant woman. They survived for eight days just by drinking rainwater.

“Something similar could have happened in the distant past. Provided that such events might have occurred over and over again, the chance that once a small group made the unintentional crossing to another island on a natural raft is there.”

Aside from the fact they made stone tools, we know very little about the people who butchered the rhino at Kalinga. Dr. van den Bergh thinks they were probably closely related to Homo erectus, and most likely the ancestors of the human found in Callao Cave — modern humans aren’t believed to have arrived in the Philippines until around 50,000 years ago.

This discovery is likely to lead to efforts to find even earlier archaeological evidence, as well as to fill in the blanks between then and now. Dr. van den Bergh said:

“There’s a lot of focus again in the islands of Southeast Asia because they are places where you find natural experiments in hominin evolution. That’s what makes Flores unique, and now Luzon is another place we can start looking for fossil evidence.

“On Flores, we’re pretty certain they arrived about 1 million years ago based on stone tool evidence, but we don’t know when hominins first arrived on Luzon. Now, we can go looking in older strata and see if we can find more artifacts, or even better fossil evidence.”

Provided by: University of Wollongong [Note: Materials may be edited for content and length.]