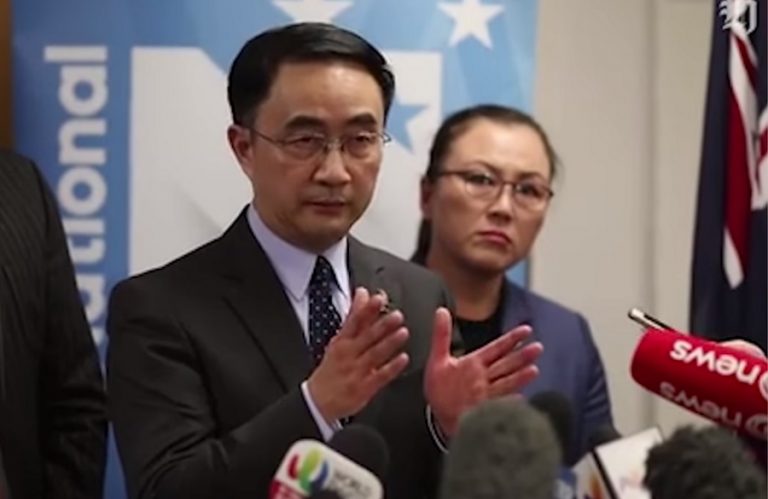 China-born New Zealand politician Jian Yang had to admit to having worked for the Chinese military’s spying apparatus after his history was exposed by the media. (Image: Screenshot via China Uncensored)

Beijing’s political influence activities in New Zealand have reached a critical level and is a threat to the country’s sovereignty, warns a report released by Canada’s intelligence service.

Canadian Security Intelligence Service (CSIS) compiled the report based on views and short papers contributed by unnamed experts at a March 6 workshop focused on the repercussions of China’s continued rise as an influential global player.

Beijing’s activities in New Zealand (a member of intelligence sharing network Five Eyes, along with the U.S, Australia, the UK, and Canada) were singled out with concern.

“New Zealand provides a vivid case study of China’s willingness to use economic ties to interfere with the political life of a partner country,” said the CSIS report published late last month.

Watch this episode of China Uncensored about how one New Zealand MP used to work for China’s spying apparatus:

The report added that the leadership on Beijing views it efforts New Zealand as an archetype of how it would like relations to resemble with other states. “The PRC’s political influence activities in New Zealand have now reached a critical level,” the report said.

Among the influence activities applied by the CCP were targeted political donations through ethnic Chinese business figures and massive efforts to bring the New Zealand ethnic Chinese community, including Chinese language media, under its control.

“Some of these activities endanger New Zealand’s national security directly, while others have a more long-term corrosive effect,” said the report.

“The impact of China’s political influence activities on New Zealand democracy has been profound: a curtailing of freedom of speech, religion and association for the ethnic Chinese community, a silencing of debates on the PRC in the wider public sphere, and a corrupting influence on the political system through the blurring of personal, political, and economic interests.”

The CSIS report comes on the heels of growing public concern about Beijing’s influence in New Zealand following the publication of research done by University of Canterbury Professor Anne-Marie Brady.

In September last year, Brady published a paper, Magic Weapons: China’s Political Influence Activities Under Xi Jinping, which focused on Chinese influence in New Zealand, and in November she released policy advice dedicated to how her government should deal with what she described as “a concerted foreign interference campaign by the People’s Republic of China (PRC).”

What is going on in New Zealand has mirrored concerns in nearby Australia. Earlier this year, sources told 9 NEWS that China topped Australia’s domestic spy agency’s list on a secret country-by-country counter-intelligence index as the most extreme threat to the country’s national security.

A number of people have written asking for the link to my paper "Magic Weapons: China's Political Influence Activities Under Xi Jinping".
So here it is, hosted by the @KissingerInst @TheWilsonCenter, free download all over the globe: https://t.co/QUD7qjTiOi pic.twitter.com/CetcQpCrJO