Sun Moon Lake, With One of the World’s Most Beautiful Bikeways 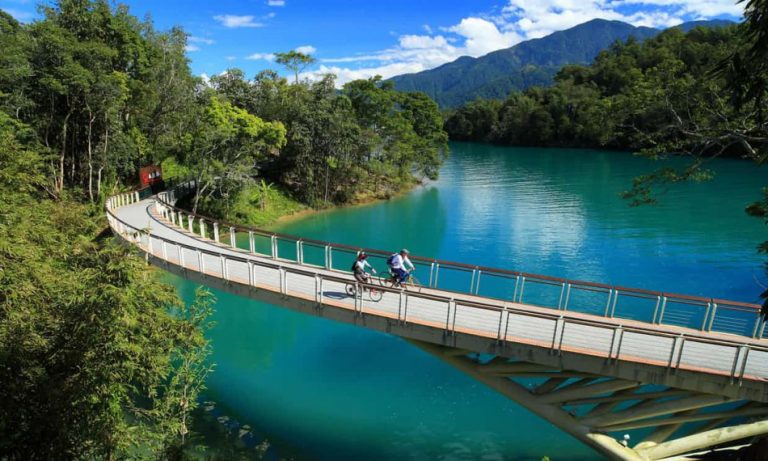 Sun Moon Lake (日月潭) is cited by several media outlets as having one of the world's most beautiful bikeways. (Image: via Sun Moon Lake National Scenic Area Administration)

With bikeways cited by several media outlets as one of the world’s most beautiful cycling trails, Sun Moon Lake (日月潭) is one of the Eight Wonders of Taiwan. Covering an area of 5.4 square kilometers (3.3 square miles) at an elevation of 748 meters (2,454 feet) above sea level, Sun Moon Lake is located in central Taiwan and is the largest natural lake on the island.

A tiny island called Lalu (拉魯) in the middle of the lake used to separate the lake into two distinct parts. The eastern part was round and resembled a sun, while the long and narrow western part looked like a crescent moon. Inspired by the shape and the beauty of the lake, it was thus named Sun Moon Lake.

Lalu Island used to be much bigger and was inhabited by Thao aborigines (邵族). During Japanese colonial rule (1895-1945), it was called Jade Island (玉島), and it was almost entirely inundated when the Japanese built a dam in the 1930s. It was renamed Kuang-hua Island (光華島) after Chiang Kai-shek’s Nationalist Government relocated to Taiwan in 1949. It was again renamed Lalu in recent years to give more deference and recognition to the aboriginal tribe in that area after a massive earthquake on September 21, 1999.

Apart from the magnificent scenery and local fauna, Sun Moon Lake also features picturesque bikeways. The bikeway around the lake was cited as one of the world’s most beautiful cycling routes by CNNGo travel life website in 2012, by the travel search website of Skyscanner and The Guardian Weekly (衛報) in 2017, and the Independent (獨立報) in May 2018.

Another striking feature of Sun Moon Lake is its gondola connecting the lake and the nearby Formosa Aboriginal Culture Village (九族文化村). Spanning 1.87 km (1.16 miles), it takes about 7 minutes for visitors to go from one end to the other. The cable cars are in red, yellow, and blue to symbolize the colors of the sun, the moon, and the lake respectively.

Some of the cable cars are glass-bottomed. Riding the gondola is a thrilling experience as you sail above the hills toward Sun Moon Lake.

Ita Thao (伊達邵) and Shuishe (水社) are the two main wooden piers facing each other on the lake. There’s a pavilion at Ita Thao Pier, which is a great location to take in the entire lake and feel the refreshing breeze from across its surface. Ita Thao is the most popular area with its restaurants, souvenir stores, and hotels along the old street. It’s relaxing to stroll around enjoying the holiday atmosphere while appreciating the traditional culture of the Thao Tribe at the Thao Cultural Village.

Shueiuatou (水蛙頭), a 4-meter-high (13-foot-high) statue of nine frogs on top of each other, is another iconic location on Sun Moon Lake. Situated in the water alongside a 600-meter (1,969-foot) elevated hiking trail along the lake, Shueiuatou is also a popular spot for those who visit. The stacked frog statue is submerged when the water level is high, and it emerges when it is low. Thus, the more frogs that are visible, the more severe the drought. Consequently, this frog statue is commonly regarded as an indicator of the country’s drought situation.

Wenwu Temple (文武廟) is another highlight of Sun Moon Lake, which has two giant Chinese guardian lions at the entrance — one male, and one female. This beautiful temple is the consolidation of two previous temples on the banks of the lake due to the construction of a dam during the Japanese colonial rule in 1919. The temple was restored by the Taiwanese government to its former glory in 1969.

Wenwu Step of the Year is also known as the “Stairway to Heaven” because of its steepness. There are 366 steps in this 150-meter-long (492-foot-long) trail, symbolizing the 366 days in a leap year. Furthermore, each step is carved with the name of a Chinese historical figure, and also includes information about the 24 solar periods according to the lunar calendar.

Visitors can also buy wind chimes for their Chinese zodiac signs and write their names and wishes on the chimes. After the chimes are passed through incense smoke by temple workers, they can be hung at an appropriate place along the two sides of the trail.