Cosmology of the Han Chinese: Taiji and Bagua 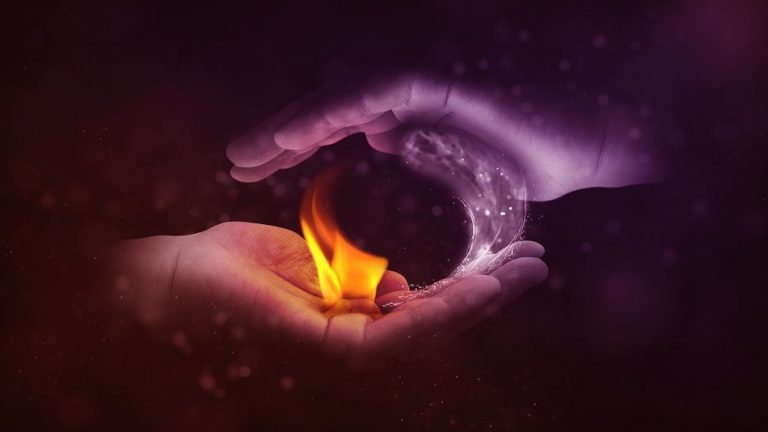 Numerous studies have confirmed that good and evil have an effect and that doing good deeds can prolong a person’s life. (Image: Comfreak via Pixabay)

Every culture on Earth has its own myths and legends that explain the origin of life. In China, there are many cultures and thus many origin stories. The following is one of the most common representing the cosmology of the Han Chinese.

Cosmology of the Han Chinese

In ancient China, the Han people believed that the universe originated as a vast field of darkness, with no distinction between Heaven and Earth. This field coalesced into a cosmic egg for 18,000 years. Inside the egg, a giant named Pangu came into being, and at the same time, the opposing principles of Yin and Yang became balanced.

When Pangu had grown to a gigantic size, he stretched his huge limbs upward and downward, and in doing so he broke the egg and emerged. His body now visible, Pangu was seen to be a hairy giant clothed in fur with horns on his head. The lighter parts of the egg floated upwards to form the heavens, while the denser parts sank downwards to become the Earth. Fearing that Heaven and Earth might meld together again, Pangu placed himself between them, his head holding up the sky and his feet pushing upon the Earth. Since then, Heaven and Earth have remained apart.

Pangu stood for 18,000 years, became exhausted, slept, and never woke up. After Pangu died, his body became the sun, moon, and stars; the lakes, seas, and rivers; the birds and animals, such as fish, prawns, turtles and crabs; the grass, wood, jade, and stone; and all forms of matter.

Humans placed between Heaven and Earth

This is the world in which the Han people live. They believe humans are placed between Heaven and Earth. In turn, each day is governed by the sun and each night by the moon. Life is divided into four seasons and four directions; the thunder and wind from the weather, and the mountains and valleys become the land. These factors affect the harvest, human life, and all manner of well-being, including the causes of disasters, such as powerful floods and great fires.

The Han people believe that if the four seasons of Heaven and Earth are smooth and in harmony, then people will flourish, harvests will be bountiful, and there will be prosperity. However, if certain forces undermine harmony, then disasters will strike, people and livestock will become restless, and careers will be rocky. At this time, people will hope that the origin of the great forces of the universe can be re-harmonized. The symbol of these great forces is the Taiji Bagua map — the visual depiction of polar opposites.

In addition to nature, the Han people view the family’s livelihood and the human body as a small universe subject to external and internal influences. When family members and livestock fall sick or careers are unsuccessful, and they cannot find a reason behind the cause, they believe that there are certain obstacles or evil spirits that undermine the harmony of their environment.

In order to eliminate evil spirits, restore the harmony between man and the universe, regain their vitality, and make people, livestock, and businesses prosper, they will resort to following the Taiji Bagua map as a guide, using its powerful energy to aid them. The homeowner will invite a Daoist priest to conduct religious rituals and place the Bagua on top of the home’s main door. In turn, this will call upon divine power that ensures that the family and livestock are safe, and their businesses can run smoothly.

This was common practice throughout China. In Taiwan, the map was drawn on the cross beam of the roof in the main hall of temples and houses.

For example, when infants are frail and sick, the elders would invite the priest to conduct prayers for the power of the universe to protect the infant until they grow up. For religious rituals, the priest would use a child’s birth data, charcoal, nails, five grains, coins, and fingernails by placing them in a ceramic cup and sealing it with the Bagua. As a result, evil spirits would not be able to find the infant’s soul to harm it.

Source of the article — the Taiwan Ethnological Museum Foundation