Remembering the Victims of the Tiananmen Square Massacre 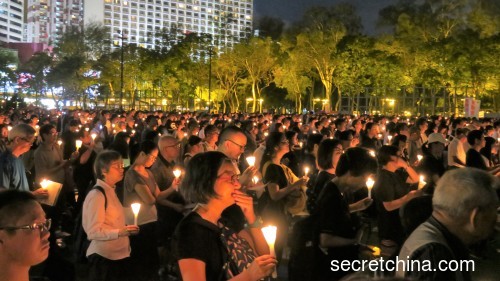 An estimated 115,000 people gathered in Victoria Park for the 29th commemoration of the June 4 massacre. (Image: Cheng Jin via Secret China)

Crowds gathered in semi-autonomous Hong Kong to remember the victims of China’s Tiananmen Square Massacre (the June 4th incident) of 1989 and fight against authoritarian rule. Tens of thousands have been coming together at Victoria Park since the 1990s, with their central message being the democratization of China.

The organizers, the Hong Kong Alliance in Support of Patriotic Democratic Movements in China, estimated that 115,000 people were in attendance this year. Participants spanned the generations — families with young children, students, workers, and the elderly — joined hearts and future hopes in a candlelight vigil.

Among them were witnesses to the atrocities committed against thousands of pro-democracy protesters — many of whom were students — in and around Beijing’s Tiananmen Square by the 27th Army of Shanxi Province.

According to Sir Alan Donald, the then-British ambassador to China, the death toll from the Tiananmen Square Massacre was at least 10,000 — a figure that allegedly fits the Communist regime’s own internal assessment. The 27th Army’s armored tanks opened fire on the crowd, before running over them at 65km/h, according to a secret cable written by Sir Donald on June 5, 1989, which is currently in The National Archives.

“Students linked arms but were mown down. APCs then ran over the bodies time and time again, and their remains collected by a bulldozer. The remains were incinerated and then hosed down drains.”

The Tiananmen Square Massacre spared no one

The Tiananmen Square Massacre allegedly continued, sparing no one, not even children and their mothers.

Clips of the crackdown were replayed on a big screen, showing scenes of gunfire, blood, and the frantic cries for loved ones, followed by an interview with Di Mengqi, a member of the Tiananmen Mothers group, who said:

“It has been 29 years since the tragic crackdown. As a mother of a child who was killed in the incident, I hope the Chinese Communist Party (CCP) can give an explanation for the 4 June massacre; otherwise, I will turn in my grave after I die!”

Any mention of Beijing’s brutal crackdown and the Tiananmen Square Massacre remains strictly censored in the mainland.

“We are grateful for the turnout this evening, despite the bad weather. Even though the CCP has been trying to disintegrate any trace of the incident in history, as long as we’re determined and fearless, the truth will pass on.”

A student at the Chinese University of Hong Kong said the crackdown was meaningful to the people of Hong Kong because it added fuel to their local democratic movements. She said: “I admire the selflessness of those students. They fought for all Chinese and were suppressed in such a brutal way! I had to come to voice my support.”

A woman named May has been attending the vigil every year to mourn the deceased of the Tiananmen Square Massacre. After watching the scenes from 1989, she said: “As a mother myself, I was heartbroken.”

Translated by Cecilia and edited by Emiko Kingswell