What Particles Get Their Mass From the Higgs Field? 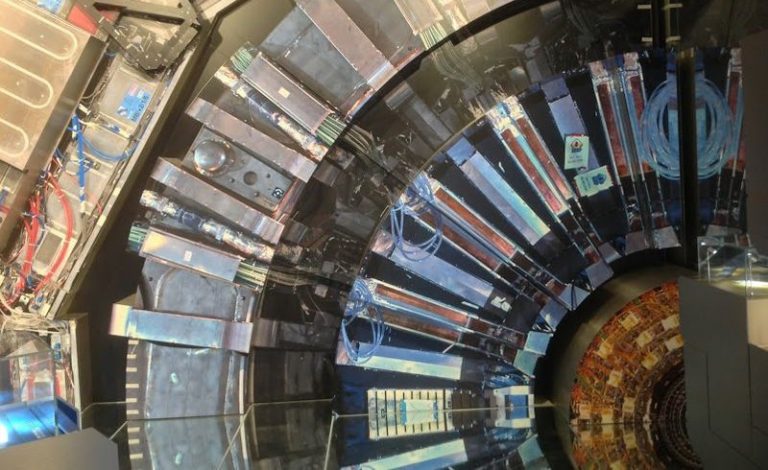 The Higgs theory is a beautifully simple explanation as to why some particles are massive while others are not. (Image: Vieamusante via Wikimedia Commons)

The Higgs field is like an endless ocean through which all matter swims. Some particles are like sponges and sop up mass as they lumber along, while others are as sprightly as tiny minnows and dart right through. The Higgs theory is a beautifully simple explanation as to why some particles are massive while others are not. But not all predictions of the Higgs theory have been experimentally tested yet.

That’s why scientists on the CMS experiment at the Large Hadron Collider are putting the Higgs boson under a microscope and trying to determine how it fits into the delicate ecosystem of particles. Scientist Patty McBride, from the U.S. Department of Energy’s Fermi National Accelerator Laboratory, which supports the research of hundreds of U.S. scientists on the CMS experiment, said:

“We know that the Higgs interacts with massive force-carrying particles, like the W boson, because that’s how we originally discovered it. Now, we’re trying to understand its relationship with fermions.”

Fermions are particles that click together to form the invisible scaffolding inside atoms. Bosons, on the other hand, are the physical manifestation of forces and perform tasks such as gluing fermions together. In June 2014, scientists on the CMS experiment published a paper in Nature showing that the Higgs boson has a relationship with fermions by measuring the rate at which it decays into tau leptons, a heavier cousin of the electron.

Later, both the CMS and ATLAS experiments found evidence of the Higgs boson decaying into bottom quarks. Now, scientists are tackling its relationship with the top quark. McBride went on to say:

“As the ‘giver of mass,’ the Higgs boson should be enormously fond of the top quark.”

“Higgs boson production is rare — but Higgs production with top quarks is rarest of them all, amounting to only about 1 percent of the Higgs boson events produced at the LHC.”

In a paper published in the journal Physical Review Letters, scientists on the CMS experiment report observing a statistically significant abundance of events in which the Higgs boson is produced in association with two top quarks. The CMS result for this rare Standard Model process with a significance of 5.2 sigma constitutes the first observation that exceeds the 5 sigma threshold physicists require.

The ATLAS experiment has also submitted a paper on the same phenomenon for publication. To get these results, the CMS experiment looked for Higgs bosons based on the numerous possible signatures it can leave behind in the detector, Neu added:

“A top quark decays almost exclusively into a bottom quark and a W boson.

“The Higgs boson, on the other hand, has a rich spectrum of decay modes, including decays to pairs of bottom quarks, W bosons, tau leptons, photons, and several others.

“This leads to a wide variety of signatures in events with two top quarks and a Higgs boson. We pursued each of these and combined the results to produce our final analysis.”

Exploring the Higgs boson’s relationship with the top quark further could also be a possible window to new physics, according to Fermilab Deputy Director Joe Lykken, saying:

“Pinning down this coupling will tell us a lot about the behavior of the Higgs and how it might also interact with other particles we haven’t discovered, like dark matter.

“Deeply understanding how the Higgs interacts with known particles could help lead us to physics beyond the Standard Model.”

Provided by: Fermi National Accelerator Laboratory [Note: Materials may be edited for content and length.]