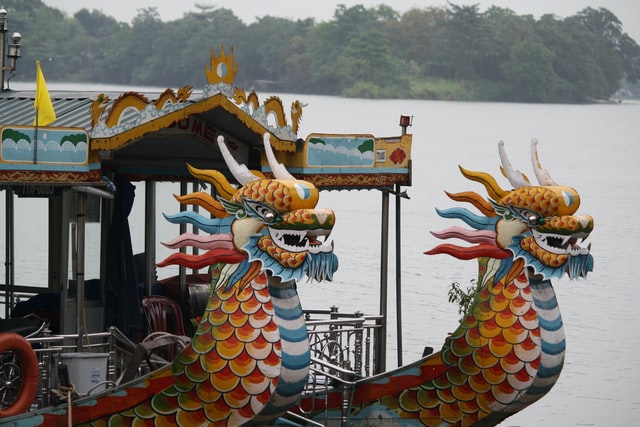 Cheered on by thousands and accompanied by the loud sounds of drums, gongs, and firecrackers, the Dragon Boat Festival features long and narrow boats decorated with colorful dragon heads, tails, and scales race in rivers around the world every fifth month of the lunar calendar.

These races are held in East Asia, Southeast Asia, and other places with large Chinese populations. The dragon boat race is the highlight of the Dragon Boat Festival, or Duan Wu Jie.

The most popular belief of the origin of the dragon boat race is related to the tragic death of the famous poet Qu Yuan. Legend has it that the patriotic poet threw himself into the river because he could not help his beloved country.

Out of respect for Qu Yuan, people rowed narrow boats into the river to try to find his body and to give him a proper burial. To honor the poet, each year this activity is carried out around the fifth day of the fifth month of the lunar calendar.

According to historical research, dragon boat racing existed even earlier than Qu Yuan’s time. For example, in the area of Gusu, there was a custom to race dragon boats to welcome Wu Zixu, the deity of the tide.

In Taiwan, dragon boat racing during the Duan Wu festival has been an important annual event since 1764. The festival usually starts on the first day of the fifth month of the lunar calendar with Taoist practitioners holding ceremonies to invite the “water deity.” Then, the dragon boat races are held on the fifth day, the height of the festival. Finally, on the tenth day, they send off the water deity and take the boats back in for the next year.

After the beloved poet threw himself into the river, the people didn’t want the fish to feast on his body. They made sticky-rice dumplings wrapped in leaves in a pyramid shape and threw them into the water to feed the fish instead.

Today, people eat the zongzi themselves and give the treat to relatives and friends as gifts. Besides sticky rice, there are many varieties of stuffing in contemporary zongzi.

Other festival beliefs and practices

The fifth month of the lunar calendar is one of the hottest months in the year. It is believed that poisonous and harmful things arise during this month. Some other popular activities for the Dragon Boat Festival are related to this belief.

Driving away the ‘five poisons’

In ancient times, snakes, scorpions, geckos, centipedes, and toads were considered to be five poisonous creatures that would come out to bring disease and harm to people.

During Duan Wu Festival, some people cut out colorful papers in the shapes of these five creatures and put them on doors, windows, walls, beds, and on children’s arms hoping to keep the Five Poisons and their diseases away.

Besides wearing pomegranate flowers, women make and carry pouches filled with fragrant medicinal herbs that are believed to be able to keep diseases away. Mothers make these pouches in fun shapes, such as little dolls, cute vegetables, and lanterns, for their children to wear to protect them.

Each region also has its own unique activities to celebrate the Duan Wu Festival. For example, in Taiwan, at high noon on the fifth day in the fifth month, people try to stand eggs upright on the ground. It is believed that whoever can succeed in doing this will have good fortune for the whole year.

The record for the longest Duan Wu egg stand was set in 2010 in Taiwan’s Chiayi County. Three eggs were still standing more than three months later after being set up on the ground on the day of Duan Wu.

In Tainan County in southern Taiwan, people arrange more than 1,000 eggs to stand in the street, lacing the town for 656 yards — almost half a mile! It’s called forming the “egg dragon.”

The fifth month in the lunar calendar also seems to be the month that most often has epidemics that kill many people and legends attribute these calamities to devils or demons. Zhong Kui is a mythical figure that is believed to catch demons.

During the Dragon Boat Festival, many households, particularly in the Yangtze delta, have the picture of Zhong Kui hung in them to ward off devils and demons.

Like many traditional Chinese celebrations, the Dragon Boat Festival has many beliefs and legends surrounding it and is celebrated around the world in many forms.