Is This the Site of the Next Major Earthquake on the San Andreas Fault? 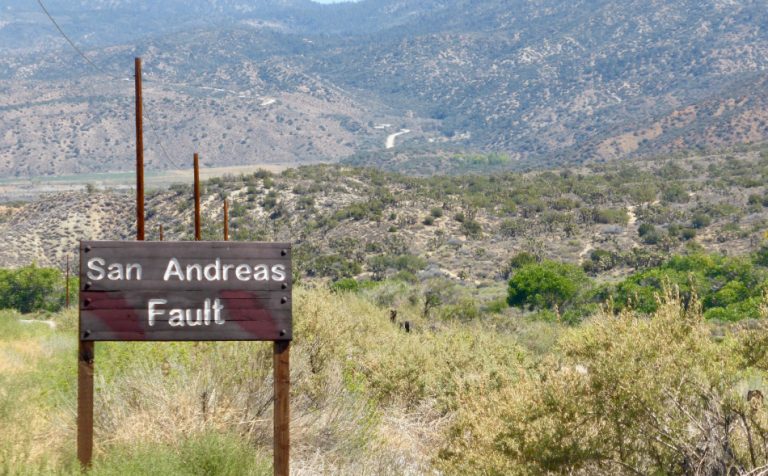 This newly identified Durmid ladder structure is at least 25 km long, has tens of master right-lateral and right-reverse faults along its edges and hundreds of left- and right-lateral cross faults in between. (Image: Michael R Perry via Flickr)

Many researchers hypothesize that the southern tip of the 1,300-km-long San Andreas Fault Zone (SAFZ) could be the nucleation site of the next major earthquake on the fault, yet geoscientists cannot evaluate this hazard until the location and geometry of the fault zone are documented.

In their new paper for Lithosphere, Susanne Jänecke and colleagues use detailed geologic and structural mapping of the southern 30 km of the San Andreas Fault Zone in southern California to show that it is a highly faulted volume of rock that is 1-4 km wide and organized as a sheared ladder-like structure in the upper 3-5 km of the Earth.

This newly identified Durmid ladder structure is at least 25 km long, has tens of master right-lateral and right-reverse faults along its edges and hundreds of left- and right-lateral cross faults in between. The Durmid ladder structure trends northwest, extends from the well-known main trace of the San Andreas Fault (mSAF) on the northeast side to a newly identified East Shoreline fault zone (ESF) on the opposite edge.

Many years of detailed field study validated the team’s 2011 hypothesis about the existence of the East Shoreline strand of the SAFZ northeast of the margin of the Salton Sea, and this paper documents this previously unknown active fault using geophysical and geologic datasets along the entire northeast margin of Coachella Valley, California.

The East Shoreline fault, say the authors, probably becomes the Garnet Hills fault, north of Palm Springs, and together they parallel the mSAF for >100 km. Uplifted, highly folded and faulted Pliocene to Holocene sedimentary rocks, evidence for pervasive shortening, map-scale damage zones, and extremely rapid block rotation indicate that convergence across the Durmid ladder structure of the SAFZ is the smaller, secondary component that accompanies more rapid right-lateral motions.

Small amounts of shallow creep and triggered slip regularly produce hairline fractures along the mSAF and Jänecke and colleagues recognize identical features within the ESF and along some cross faults of the Durmid ladder structure. It is not clear how past earthquakes interacted with this well-organized multi-fault structure, and, notes Jänecke, this makes future behavior difficult to predict. The mSAF was the only active fault considered by the geoscience community in this crucial area prior to our detailed study.

New and published geophysical data sets and drill hole data in Coachella Valley show that the East Shoreline fault is a voluminous fault zone that extends in all three dimensions. It is well-imaged southwest of the mSAF and appears to persist into the subsurface at the southwest edge of a flower structure that may converge and simplify at depth.

In such an interpretation, the ESF is steep, dips northeast, and is a key structure at the basinward edge of an asymmetric flower-like structure identified by Fuis et al. (2017) directly northwest of this study area. Southward, the Durmid ladder structure widens gradually as it bends and interacts with the even wider Brawley Seismic zone. The component of shortening across the southernmost San Andreas Fault Zone gives way along strike to components of extension in the Brawley Seismic Zone within a defined transition zone.

This geometry makes it likely that both fault zones could fail during a single earthquake, as suggested by prior research. Several-kilometer-wide strike-slip fault zones, like the southern 30 km of the SAFZ, occur along many active faults and underlie metropolitan areas. The 2016 Mw 7.8 Kaikoura earthquake in New Zealand revealed that ladder-like fault zones can be enormous (at least 25 km wide and 150 km long) and fail in a piecemeal fashion.

The surface-faulting hazards, ground shaking, and cascading ruptures that might arise from interactions among faults in active, voluminous fault zones are not well understood or quantified, and much research is needed to mitigate the risk posed by this important type of structure.

Provided by: Geological Society of America [Note: Materials may be edited for content and length.]