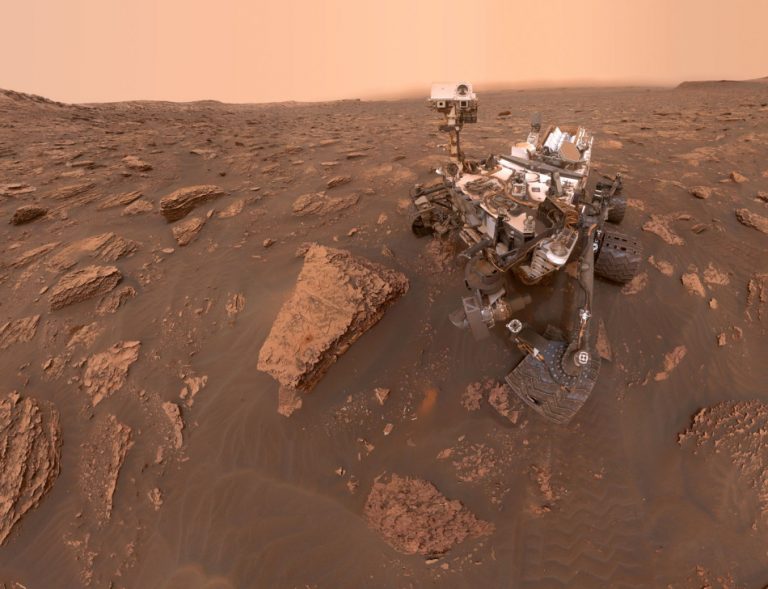 A self-portrait of NASA's Curiosity Mars rover shows the robot at a drilled sample site called 'Duluth' on the lower slopes of Mount Sharp. A Martian dust storm reduced sunlight and visibility in Gale Crater. (Image: via NASA)

Mars is our closest interstellar neighbor, and the red planet is currently in the middle of massive dust storms that have been circling it for the past couple of weeks. While these present an awesome opportunity for scientists to study the unique weather patterns of Mars, it could spell disaster for the two rovers that are currently exploring the surface of the planet. What is NASA doing to ensure that these two rovers survive the current dust storms on Mars?

The dust storm that is currently engulfing our rovers covers one-quarter of the surface of the planet. These global storms pop once every three Martian years, or five-and-a-half Earth years or so — and can last for weeks at a time. There are storms that occur annually as well, but they usually are smaller than the global storms that are currently spread out across the Martian surface.

The wind speeds in these storms can top 60 miles per hour — similar to the storm that stranded Mark Watney on Mars in the 2015 movie The Martian — but it is unlikely that any future astronauts visiting Mars would be in danger of being stranded on the red planet.

The same can’t be said for the two Mars rovers — Curiosity and Opportunity. One of them is already facing the brunt of the storm.

For want of sunlight

Opportunity, the first of the two rovers to explore the Martian landscape, is offline currently and likely will be until the global storm is over. Opportunity relies primarily on solar energy for power, and while it is underneath the storm, it can’t get the sunlight it needs to operate.

These storms will present a problem for future Mars settlements if they rely on solar power exclusively — they won’t be able to generate electricity during dust storms, which could leave them without water or oxygen for the duration. With these storms that last weeks at a time, that could be a death sentence.

Opportunity took some pictures of its worksite as the storm arrived before the rover went offline, showing how the normally subtle light of Mars turned a deep red because of all the dust in the air. This isn’t a bad thing though — while Opportunity might be offline for the duration of the story, scientists are hoping that this will enable scientists to figure out why some of these storms last for days and others last for weeks or longer.

Opportunity is expected to survive the storm, as long as it’s batteries hold out and it stays warm enough. When fully powered, Opportunity uses its onboard heaters to protect its systems from the brutal cold of the Martian landscape. Right now, in low power mode, the rover only wakes up long enough to check if it’s batteries have recharged before shutting down again. Thankfully, dust storms tend to keep the surface temperature higher than it would be otherwise, so the rover should be fine.

Curiosity is on the other side of Mars from Opportunity, but even this rover can see the massive storm and is being affected by it. Curiosity isn’t directly under the storm, so it is able to continue its work while Opportunity is in low power mode, but it is having to take longer exposures when taking photos because of reduced light conditions.

Right now, the entire sky on Mars is red because of the intensity and size of the storm. All Curiosity is doing right now is monitoring the storm. Since the storm is showing no sign of clearing, it remains to be seen if Curiosity will be affected by this massive dust cloud. All this rover needs to do is rotate its camera down toward the ground when it’s not in use to protect it from the winds.

You can keep up with both rovers and the growing storm on NASA’s storm watch page.

We’ve got our fingers crossed that both rovers make it through this storm unscathed. While we love watching their adventures, the answers that they could provide for scientists about the nature of these dust storms could prove invaluable to future astronauts and settlers on Mars.