The Red Yao Women of the ‘Long Hair Village’ in China 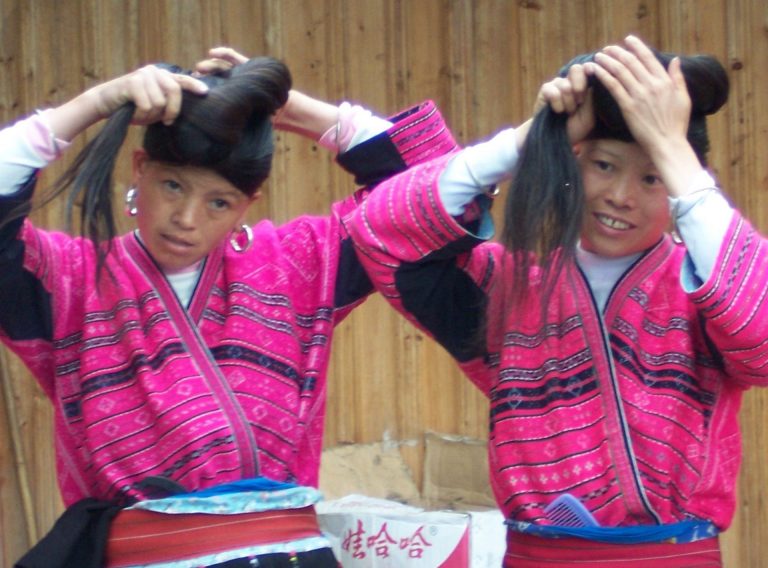 A married woman who has children will carry her hair wrapped around her head like a turban curled into a bun in the front. (Image: McKay Savage via Wikimedia Commons)

The red Yao women are a minority ethnic group from the Huangluo Yao Village, northwest of Longsheng County in China’s Guangxi Province. Their village is also popularly known by the alias “Long Hair Village.”

The females among this ethnic group have an average hair length of 2.3 meters (about 7 feet).

They usually keep their long black hair wrapped under headscarves. It is a special moment when they finally let their hair down to wash and comb by the river. It has become somewhat of a special event to see the Yao woman let down their hair in the ceremony of head grooming.

Tourists flock to the village just to catch a glimpse of this rarely-seen scene.

The ancient hair tradition of the red Yao women

The way the female Yao do their hair is according to a very old tradition. They have most probably been doing it this way for more than a thousand years.

Rice is not just a main staple crop for the Yao, but also the main ingredient to the concoction, or hair lotion as we would call it, that these women use to keep their hair looking so clean, healthy, and fine.

In ancient times, tradition required them only to take down their hair in the presence of close family.

This matter was taken very seriously, and if a man was to coincidentally stumble upon a woman with let-down hair, the man was forced to spend three years with her family as their son-in-law.

They would only cut their hair once in their lives, on their 18th birthday. This is when the young woman is supposed to start looking for a partner.

Huangluo Village is Home to the Yao Ethnic Minority, Famed for Their Long Hair#China #TRLThttps://t.co/jeIf9OHctn pic.twitter.com/eWu8ehhv2o

Anyone who visits the Huangluo Village can recognize a woman’s social status by her hairstyle.

The Huangluo Village holds over 80 households and is well known across China. It is even acknowledged by the Guinness World Records as the “world’s longest hair village.”