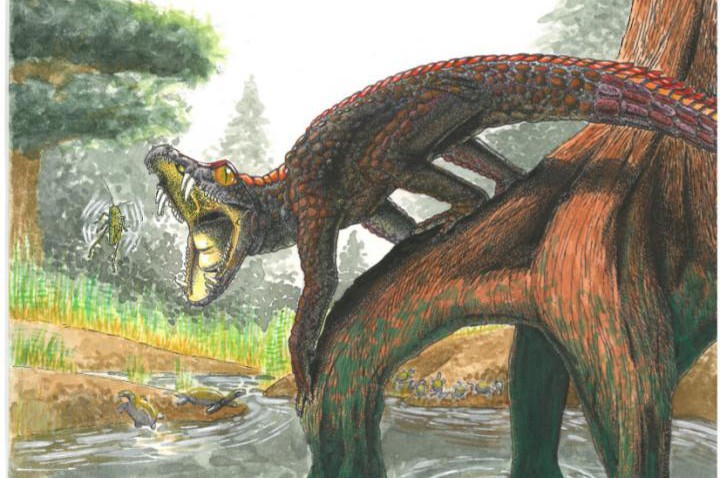 This study showed that these early crocodilians, the shartegosuchids, are important because they evolved a completely closed secondary palate much earlier than previously thought. (Image: via Viktor Rademacher)

The mouth of today’s crocodilians inspires fear and awe, with their wide gape and the greatest known bite force in the vertebrate animal kingdom. However, this apex predator of today and its modus of attack (its mouth) had humble beginnings. Ancient crocodiles were very different from today’s crocodiles.

The very earliest crocodilians were very different from the beasts we know well today. They were much smaller bodied, slender, and had longer legs. It is speculated that they led a much different lifestyle to the crocodiles we all know and fear today.

A new study by a team of international experts, led by University of Witwatersrand Ph.D. candidate Kathleen Dollman and Professor Jonah Choiniere, published in the American Museum Novitates, endeavored to further explore the mouth of one of the earliest occurring and least understood groups of crocodilians, the shartegosuchids.

In 2010, Choiniere was a part of a field team working in the Late Jurassic (±160 mya) exposures in the western Gobi in Mongolia when he found the fossil of a small snout of a shartegosuchid. This work was co-authored by researchers based at the American Museum of Natural History, George Washington University, and the Institute for Vertebrate Palaeontology and Palaeoanthropology.

This study showed that these early crocodilians, the shartegosuchids, are important because they evolved a completely closed secondary palate much earlier than previously thought. This is an interesting example of convergent evolution, whereby a similar feature evolves independently in two completely unrelated groups.

The advent of a convergent evolutionary event allows scientists to test questions about why that feature evolved and even the function of that feature, which in this case is the first step in understanding the purpose of a closed secondary palate in crocodilians. Shartegosuchids have a thickened and sculptured palate together with a tall and short rostrum, whereas extant crocodilians have a smooth palate with a long and broad rostrum. Dollman said:

“I was surprised to find that there were many features in the palate and snout that were completely different between shartegosuchids and extant crocodilians.

“We would expect to see the same palatal structures and snout shapes in both shartegosuchids and extant crocodiles if they were using it for similar functions and had evolved a closed palate for similar reasons.

“The observed differences tell us that shartegosuchids likely had predation practices to which there is no modern analogue in crocodilians.”

“It’s been nearly 10 years since we collected this fossil after driving 5 days across the Gobi Desert, and I am delighted that it’s formed a part of Kathleen’s Ph.D.”

Provided by: University of the Witwatersrand, Johannesburg [Note: Materials may be edited for content and length.]