A Heroic Dog That Wins the Admiration of Many People 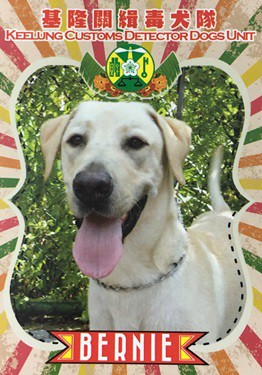 Bernie is by far the most outstanding detector dog in Taiwan Customs history. (Image: via Keelung Customs, Customs Administration, Taiwan)

Bernie is a retired Customs detector dog that had served loyally for seven years with the Taiwan Customs Administration. During his service, the heroic dog helped to intercept over 1,000 kilos of various kinds of illicit drugs that were smuggled into Taiwan and is by far the most outstanding detector dog in Taiwan Customs history.

Bernie is a Labrador retriever that was born on December 25, 2008, at Taiwan’s Customs Detector Dog Breeding and Training Center (CDDBTC). He was conceived using frozen semen provided by a dog with the Australian Customs and Border Protection Service.

After Bernie finished a two-year socializing program with a volunteer foster family, he was paired with a new recruit named Austin to undergo a rigorous 13-week training program in 2011.

Bernie has a good inborn quality, and under Austin’s care, he won first place in the training program and was deployed to Keelung Customs in northern Taiwan.

At Keelung Customs, Austin and Bernie were a perfect team and established an excellent rapport. They were usually deployed to sniff for drugs in import/export cargoes, express consignments, and postal parcels at container terminals, warehouses, and the post office’s international parcel center under the jurisdiction of Keelung Customs. They also partook in anti-drug abuse operations at nightclubs under the command of local government investigators.

The heroic dog has made a name for itself and impressed many people in Taiwan. During his service, he sniffed out 12 major drug smuggling cases with a total weight of 1,430 kilos. Among his seizures, he uncovered 72 kilos of amphetamine concealed in an import shipment of LED lighting fixtures and 1,080 kilos of the drug precursor ephedrine falsely declared as a chemical material. He also discovered 8 kilos of ketamine hidden inside motorcycle handlebars.

Thanks to the heroic dog’s outstanding performance, not only was his handler honored as a model civil servant of the Ministry of Finance in 2016, but his foster family was also similarly awarded by the Customs Administration.

Bernie retired on November 18, 2016, at the age of nine, which is roughly equivalent to 65 human years, the retirement age of most Customs officers. Bernie was adopted by his partner and is temporarily living with Austin’s friend, who is a teacher in central Taiwan’ Taichung City, as it is not so humid there. Austin visits Bernie from time to time, and Bernie remains active and in good shape to this day.

Taiwan Customs Detector Dog Breeding and Training Center produces about 40 to 50 pups per year, and the selected ones are raised by approved volunteer foster families to learn how to interact with humans and to adapt to various situations.

Currently, there are about 40 dogs serving in the four field Customs Offices, and many of them are as competent as Bernie — they also helped to intercept 3,061 kilos of various drugs over the past year.