Soccer Team Found Alive After Being Trapped Inside a Cave 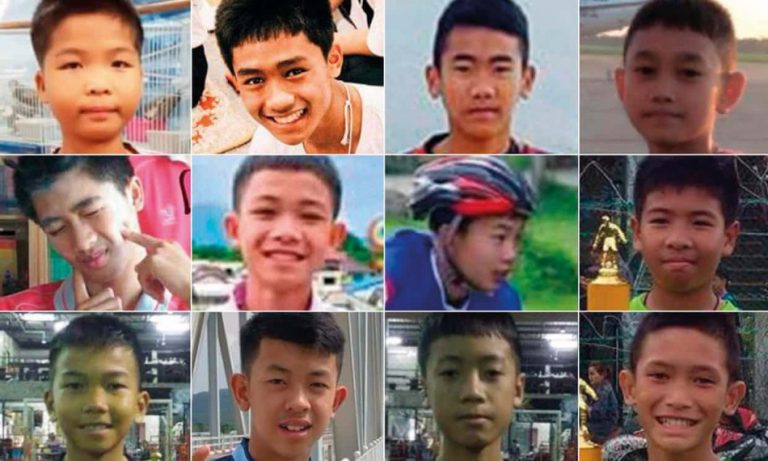 Twelve boys and their football coach were trapped in a cave in northern Thailand for more than two weeks. (Image: Screenshot via YouTube)

After being trapped in a cave in Thailand for nine days, 12 young boys and their coach from a soccer team were discovered to be safe by the rescue team. However, the task of bringing them to the ground was still proving to be a big challenge.

It was on June 23, 2018, that the 12 boys of a local soccer team named the Wild Boars and their coach went out to explore the Tham Luang cave, which is a famous tourist site. However, once they were inside the cave system, heavy rains flooded the exit, leaving the group trapped deep inside the cave.

When an officer found out that a few boys had left their bicycles parked at the off-limits area of the cave, he alerted the people in charge. It was then that the authorities considered the possibility that people might be trapped inside the cave. They soon jumped into action, fearing that the kids may be dead.

In the following days, a large-scale effort involving more than a 1,000 volunteers and seven countries was launched in a bid to find the location of the trapped boys. And on July 3, British divers found the group huddled together in one of the wider chambers of the cave system.

The discovery of the kids came as a huge relief to the parents, who were stressed out for over a week. “I was happy to hear the cheering from the rescue workers. I felt that I have hope that I am going to get to see my son alive… I want to hug my son… usually our family sleeps in the same bed together. We are a very close family”, CNN quotes a family member of one of the trapped boys.

However, the rescuers soon realized that the boys could not be brought out of the cave because of the narrow spaces of the system and the water that has flooded the place. The rescue team sent food and other essentials to keep them well-fed.

Then, the oxygen level inside the cave dropped to just 15 percent, posing a real danger of brain damage to the kids. Plus, the possibility of even more rains in the coming days posed a serious challenge to the rescue team, who were yet to come up with a solution to get the children out.

“Whatever we decide to do, we have discussed it with a lot of people, hundreds of experts… We’re still at war with the water, and with time; when we found them, we had won one battle, but we still have to rescue them to win the war”, Time quotes Narongsak Osottanakorn, the chief of the rescue mission.

Meanwhile, the trapped boys reportedly remained calm thanks to their coach, who is an expert at meditation. The guided meditation offered by the coach is believed to have helped them control their fears and cling on to the hope of being rescued.

Even the mother of one of the trapped boys admitted that the presence of the meditative coach had been helping her son survive through this danger. “Look at how calm they were sitting there waiting. No one was crying or anything. It was astonishing,” Khaosod quotes the mother.

All that was left for the rescue team to do is to pull out the kids from the cave system. And people across Thailand prayed deeply for good news.

By July 10, all 12 players – ranging from 11 to 16 years of age — along with the 25-year-old coach, had been extracted from the cave. The team had to be pulled out over a three day period as Thailand’s annual monsoons flooded the cave, prompting a massive and frenzied search and rescue operation. The boys and their 25-year-old coach were soon discharged from a hospital in the northern province of Chiang Rai where they had been receiving treatments since their rescue. Doctors said the boys were able to gain about 6.6 pounds on average since they were rescued from the cave. They had lost about an average of 9 pounds while trapped inside the cave.