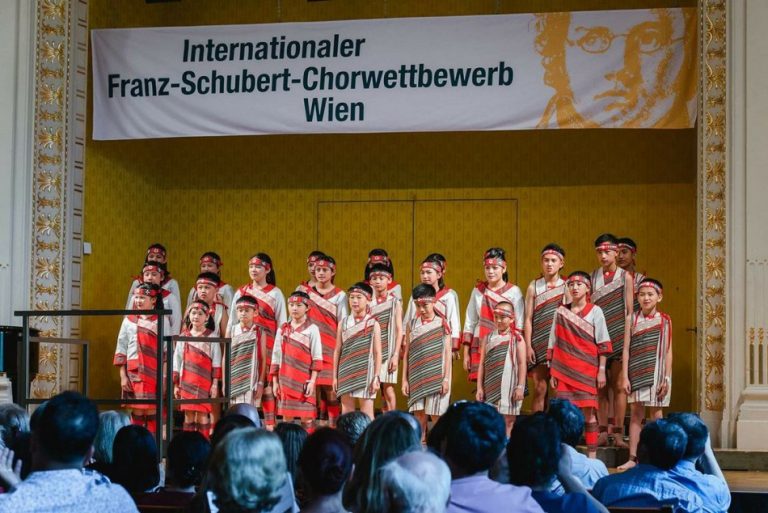 The choir from the Yihsing branch of Jiahsing Elementary School in Taiwan attended the 31st Franz Schubert Choir Competition in Vienna. (Image: via Facebook)

Recently, on a street in Vienna, Austria, the city of music, a Taiwan children’s choir sang with voices as beautiful as that of a golden songbird. Their flash mob performance mesmerized the crowd. What was the story behind their performance?

The children were members of a choir from the Yihsing branch of Jiahsing Elementary School in Jianshi Township in Taiwan. They traveled to Austria to attend the 31st Franze Schubert Choir Competition, which took place in Vienna from May 30 to June 3 and attracted 18 choirs from 12 nations.

The group had initially abandoned their plan to attend the competition because many of the children were from poor families and could not afford the traveling expenses. Some did not even have luggage and could not afford to buy it for the trip. Fortunately, after the need for money was reported by local media, funds were raised so they could realize their dream of attending the competition.

The Taiwan children’s choir sang in a flash mob fashion

Some of the children were not used to the new environment after they arrived at Vienna. This had a negative impact on their voices. The instructor decided to orient the Taiwan children’s choir by singing in a local square in a flash mob fashion so that they could adjust themselves and their voices.

The Yihsin branch of Jiahsing Grade School is located in a remote area, with only 21 students in total. Most of the students are from poor families. The school was once on the verge of being shut down due to a lack of operating funds. Over the past two years, however, the choir of this small school has performed so outstandingly well that it was chosen to represent Taiwan at the international competition, which was a great feat for these children from the remote countryside.

Because of their beautiful voices and fantastic performance, the Taiwanese choir received a gold medal and the jury’s special prize, the only special prize granted in the prestigious competition in Vienna. Now, they can reach an audience from all over the world, which is another even larger dream realized.

Watch the following video of the choir’s performance at the Franze Schubert Choir Competition in Vienna, Austria: