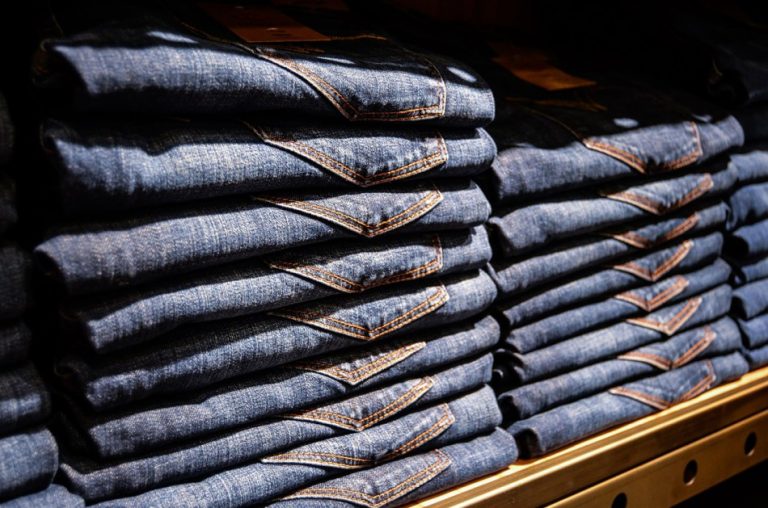 Denim manufacturers for the world’s top brands have steadily grown in Xintang, a town in the province of Guandong, where 60 percent of China’s jeans are produced. (Image: jarmoluk via Pixabay)

Jeans are again at the top of most people’s must-have in fashion. 2017 saw the largest annual growth rate in the sector since 2013, according to The Guardian, with over US$95 billion in sales worldwide. Sales of premium designer jeans have doubled, while designers from Tom Ford, MaxMara, and Versus Versace accentuated deep indigo denim for the spring/summer season. Yet, there is a dark side to China’s denim industry.

Yet, few people who trail the high streets and fashion outlets in search of that perfect pair of jeans are aware of the secrets behind the production of denim. The Price of Blue Jeans — a 2011 German documentary by Michael Höft and Christian Jentzsch, who went undercover in China — reveals the shocking reality in a town that has been labeled “the capital of jeans.”

The capital of jeans

Denim manufacturers for the world’s top brands have steadily grown in Xintang, a town in the province of Guandong, where 60 percent of China’s jeans are produced. Records show that 260 million pairs of jeans were produced in Xintang in 2008 alone for export to Russia, the United States, and the European Union.

One pair of jeans from Xintang sells for less than US$11, yet 490,000 laborers depend on the factories for their livelihoods, according to the documentary. Many in China believe that the industry is eliminating the ancestral lineage, as youth are migrating out of the villages in search for work, often at a very young age, instead of staying with their families and continuing in their traditional professions.

The human cost of denim

The denim garment business in Xintang began in the 1980s and has been booming ever since. Factory workers can be seen everywhere in the town — mostly females — and some are minors under 10 years old. Work can typically start at 8 in the morning, with overtime after 7 pm — which often goes uncompensated as many labor overnight to meet production deadlines. For tasks such as cutting thread, workers can earn 15 cents per piece or about US$4 per day.

Production areas are tightly packed and the atmosphere tense; heads down and silent, workers absorb themselves in their tasks — whether it be pedaling their machines, ironing, cutting, or packing — in a constant battle against time and fatigue, and the worry of whether they will get paid. In many factories, the machines never stop and workers rotate on shifts, six days a week. The rooms are noisy, hot, and humid and pungent with the smell of chemicals and dust, because the fans of the heavy duty machines have not been cleaned in years, and the ventilation system is outdated. It’s hard to tolerate the face masks, which makes it even hotter and harder to breathe, so many workers choose not to wear them, risking lung disease.

Distressed denim jeans are bleached, polished with stones, and washed to achieve the aged look so many people desire. Yet the strong bleaching and washing chemicals, and the blue pigment dust from the denim can penetrate the workers’ lungs during the distressing procedure, causing respiratory damage. Some workers have the job of removing the dust and thread that get stuck on the jeans using air guns, which are very noisy. They are not given any ear protection. “Young people in their twenties, working in such a harsh environment, are likely to be deaf within one year,” commented a visiting German supplier.

Every morning, workers must scoop the stones that are used to polish the jeans out of the wastewater, causing their fingers to turn blue from the toxic dyes and carcinogenic chemicals. This wastewater from the dying and polishing procedures is then discharged into the environment without any filtering or treatment. An investigation by Greenpeace in 2010 found that at three sampling sites in Xintang, the amounts of lead, copper, and cadmium in the riverbed exceeded the national soil quality standards, with one sample of river mud containing cadmium at levels that were 128 times over the safe limit.

Blue plastic buckets filled with various chemical concoctions used in the intensive washing of the denim are stored in the factories’ washing departments. The jeans are washed over and over again to achieve the desired effect — sometimes up to 20 times. Carcinogenic substances from the chemicals become embedded in the denim and are slowly released, harming the health of the factory workers and potentially the consumers.

It’s estimated that 960 gallons of water are used for each pair of blue jeans produced. The wastewater — black, blue, or red in color — is washed into rivers, where pollution has reached alarming levels. Some wastewater flows directly into the small local rivers and eventually flows to the Dongjiang River.

The factories’ impact on air pollution is also disturbing; noxious gasses from the chemicals used can be smelled throughout Xintang. One resident says the foul smell of the wastewater wakes her up every morning at 4 a.m. Farmers near the river suffer from the stench of the water every day, as well as its pollution to their land and the effects on their crops. Using Google Map’s satellite view, one can see black waters from Dongjiang River near Dadun Village in Xintang flowing into the sea.

Since the early 1990s, fashion brands and advertisers have fed consumerism and the desire for new clothes. Worldwide, approximately 80 billion garments are produced annually, which is equivalent to 11 pieces of clothing per person, per year. At the same time, the number of worn clothes being discarded is also growing. In Shanghai alone, hundreds of tons of garments are being discarded every day, equating to 130,000 tons a year. The shocking truth behind China’s denim production highlights only one problem within the fashion and clothing industry worldwide.