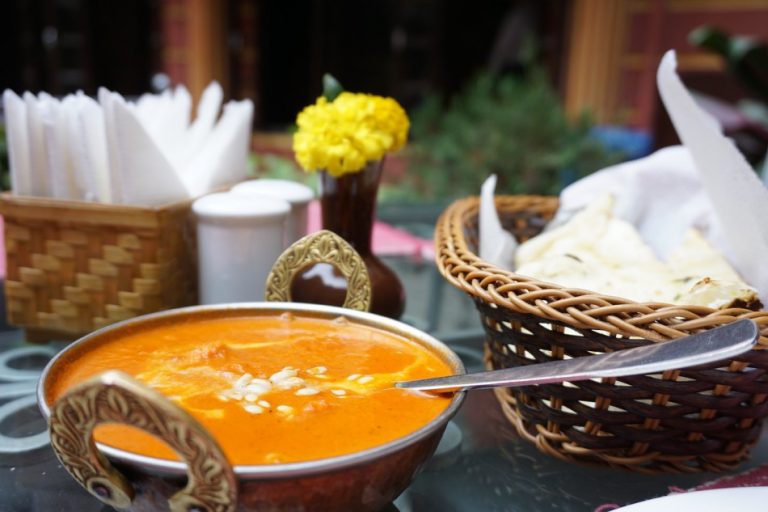 For anyone looking to prepare an authentic Indian curry, paneer butter masala is an excellent choice. (Image: via Pixabay)

Originating in the northern regions of India, paneer butter masala is one of the most famous dishes in the country. The combination of cream and paneer cubes (Indian cottage cheese) with aromatic spices ensures that anyone who tastes it will definitely want to eat more. And if you are looking to prepare an Indian curry for your little house party, paneer butter masala is the best choice. The recipe takes about 50 minutes to prepare.

Add the oil and 1 tbsp of the butter to a deep pan. Once they become hot, add the chilies, ginger paste, garlic paste, cinnamon, cloves, peppercorns, bay leaf, and cardamom. Sauté the spices for a couple of minutes, then add in the cashew butter and onion. Continue sautéing until the onion starts becoming translucent. At this point, put in the tomatoes and mix everything up very well. Now, cover the pan and cook until the tomatoes start to break down. When you see the oil separating from the mix, turn off the flame and set the pan aside to cool.

Once the mix has cooled down, take out all the whole spices. Put the mixture into a food processor and make it into a smooth paste. Set it aside.

Add in the remaining butter into the same pan and start heating it. Pour the paste into the pan. Put in the chili powder, turmeric powder, garam masala, salt, and ketchup. Add about half a cup of water and let the mixture boil. Bring the sauce to a simmer and let it cook until you see the oil separate. This should take about half an hour. Now, take the paneer cubes and add to the sauce. Mix in well. Remember to be gentle when mixing the paneer into the sauce to prevent breaking the cubes.

To finish off the recipe, grind the dried kasuri methi into a powder and mix it up with the curry together with the fresh cream. Turn the flame off and garnish the curry with cilantro. You can now serve the dish.

A few cooking tips for your paneer butter masala

Use ripe tomatoes for the dish or else it might end up lacking the traditional punchy flavor.

You can substitute almond butter for the cashew butter.

If the dish turns out to be a bit too acidic, try adding in some sugar to neutralize it, but this should only be done after the cream has been added.

To give the paneer a different texture, you can fry the cubes up before adding them into the sauce.

For best results, use homemade paneer instead of buying it. Making paneer at home is pretty easy. Just heat milk and add in some lemon juice when it’s hot. It should soon separate into paneer and whey. Strain out the paneer, wrap it in a cloth and place a heavy object on it for some time. The paneer will now be set and you can cut it into cubes for preparing the paneer butter masala.