China’s Destruction of Cultural Sites During the Cultural Revolution 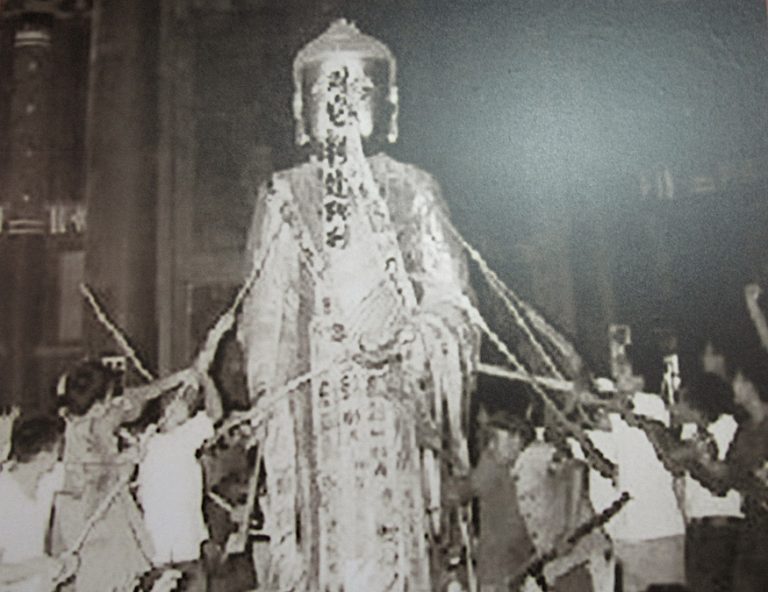 Among other things, the red guards destroyed many priceless artifacts during the Chinese Culture Revolution. (Image: Via Flickr)

In China, during the Cultural Revolution, much damage was done to both the Chinese people and China’s traditional culture.

Temples were looted. Relics, temples, scrolls, and books containing vast amounts of cultural heritage were burned and destroyed under the red gaze of the Cultural Revolution.

What many people don’t know is that the Cultural Revolution in China, 1966-1976, was more than just a large campaign to instill Communist Party culture into the minds of the Chinese people and transform China from an agrarian society into a modern industrial society. It was more than just a revolt to overthrow the monarchy and establish an ultra-left party system in China.

A large part of the Culture Revolution’s agenda was also the destruction of traditional Chinese culture, or as it was officially called “Destruction of Four Olds Campaign.”

The Chinese morals and values, their traditions and beliefs were like a thorn in the eye of people like Mao Zedong and his advocates during the Cultural Revolution.

With the destruction of “the Four Olds,” the Communist Party hoped to abolish all ties to Chinas traditional past — this included the destruction of old customs, old culture, old habits, and old ideas. The reasoning behind this was that these “Four Olds” “were responsible for the holding back of China’s development.”

Incalculable damage to Chinese antiques during the Cultural Revolution

True numbers have never been estimated, but the incalculable damage to all of China’s literature, scrolls, and other classics was massive.

Antiques were destroyed or confiscated, or in many cases stolen by the red guards, who “searched and ransacked homes” of people considered to be bourgeois, or put plainly, the middle-class people who were perceived to have materialistic values.

We know today, from analysis of the Communist Party’s strategies to get to power, that they used the middle class as a scapegoat to mobilize the less fortunate and the working-class to destroy the structures of a free market and put the financial and economic power into the hands of a self-selected few.

Priceless antiquities were shattered to pieces, even families’ long-held genealogy books and ancestor paintings were confiscated or burned to ashes.

Nothing related to traditional Chinese culture was safe. Libraries were ransacked, monuments destroyed or severely damaged, and religious sites and tombs of historical figures were looted and desecrated.

The red guards also destroyed many priceless artifacts, like those from the tomb of the Ming Dynasty Emperor Wan Li. In Beijing, the remains of the emperor and empress were publically denounced and burned.

According to the book Mao’s Last Revolution, by the end of the Cultural Revolution, 4,922 of the 6,843 officially designated “historical interest” sites in Beijing had been destroyed.

One might say it was a wonder that the Forbidden City escaped the mass chaos.

One may arguably say that one of the most painful acts of vandalism toward priceless cultural relics was the destruction, looting, and burning of an over 2,000-year-old temple of Confucius in Shandong in 1966, when more than 200 students from Beijing Normal University traveled to the sacred site with the aim of completely demolishing it.

Religious text and wooden figurines were usually burned, typically before the public, to display “patriotism.”

The disastrous destiny of traditional artifacts, literature, and culture was not limited to its dark pages in China’s history, but continues to this day, not just in China, but all across the world.

While there is some seeming effort in China to preserve cultural heritage sites, by listing them as World Heritage Sites, many critics claim that those listed sites lack authenticity and mostly serve as a tourist magnet.

One example of the fading authenticity of cultural heritage sites in China is the ancient town of Lijiang. After its listing in 1997 as a World Cultural Heritage Site, the number of Naxi minority people living there as part of the cultural heritage of the town “reduced from about 40,000 to several thousand, as a result of the pressure of social development and overdevelopment.”

Tens of thousands of tourists would go there every day as the town slowly turned into a busy shopping canter full of bars.

It seems there are a growing number of heritage sites in China that “are over commercialized due to regional economic development.”

While a part of China is doing its best to restore its once glorious traditional culture, there is a still powerful ruling elite that believes the remnant path left by the Cultural Revolution is the way to go.