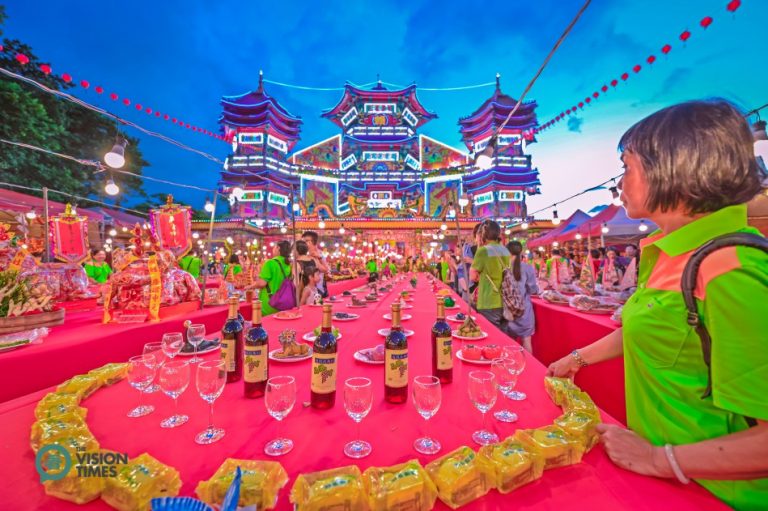 The Keelung Ghost Festival (雞籠中元祭) is celebrated on the 15th day of the seventh lunar month in northern Taiwan's Keelung City. (Image: Johnny Lin via Nspirement)

Not only is the Keelung Ghost Festival (雞籠中元祭), also known as the Keelung Chung Yuan Festival (基隆中元節), an important festive event for those who live in northern Taiwan’s Keelung City, but it is also the first festival to be designated a part of Taiwan’s intangible cultural heritage by the Taiwanese government and is one of 12 major festivals in Taiwan.

The origin of the festival can be traced back to a clan conflict in 1853 during the Qing Dynasty that led to heavy casualties. Once a truce was finally agreed upon, the 15 most influential clans in Keelung began taking turns to host the annual spectacular rendezvous in order to placate the souls of their dead ancestors. This year marks the 164th anniversary of the Keelung Ghost Festival, and the celebrations are organized by the Lai Clan Association (賴姓宗親會).

You can watch the following video for highlights from the 2018 Keelung Ghost Festival (雞籠中元祭) celebrations.

The Keelung Ghost Festival is observed on the 15th day of the seventh lunar month every year, which fell on August 25 this year. But a series of traditional rituals and celebrations are held throughout this lunar month, as the entire month is regarded as the “Ghost Month,” according to folklore.

Among them, the largest group was organized by the Taiwan Falun Dafa Association. Besides having a magnificent float, the group also presented a marching band with some 150 members and a waist drum troupe made up of 70 people.

In addition, there were about 20 young females dressed as fairy princesses to give away colorful paper-folded lotus flowers to spectators all along the parade route.

One thing special about the parade this year was that the leading group organized by the hosting Lai Clan Association was headed by Taiwan’s Premier William Lai (賴清德).

The premier was invited by the Keelung Lai Clan Association to take part in the event, as he belongs to Clan Lai and was born in a fishing village not far from Keelung City. The long procession of the parade wound through the streets of this tiny port city from 6 p.m. to 10:30 p.m.

This signifies giving directions to roaming ghosts and the spirits of their ancestors and other deities. It is widely believed that the further away a lantern floats on the sea before it extinguishes, the luckier the members from that clan in the coming year.

Another highlight of the Ghost Festival celebrations was the Grand Pudu (General Salvation普渡). It was held in front of the richly decorated Main Altar (Zhupu Altar,主普壇) at Keelung Zhong Zheng Park on the evening of the 15th day of the lunar month. Various offerings were placed on the tables in front of the Main Altar, while traditional rituals were conducted by a Buddhist master.

In fact, the Chung Yuan Festival and the Ghost Month are widely observed by Chinese people in various places around the world, as legend has it that the gate to hell is wide open from the first day until the last day of the month. The seventh lunar month is therefore a period for wandering ghosts and spirits of the nether realm to enter into the mortal world to enjoy sacrificial offerings.

To mark this important festival, Taiwanese shops and households may prepare various sacrificial items on makeshift altars in front of their premises or homes for their ancestors, deceased loved ones, and wandering ghosts. This is the so-called Chung Yuan Pudu (中元普度). According to Taiwanese tradition, Pudu can be done at any day in the seventh lunar month. So, it is not uncommon to see people burning incense and ghost money in front of their shops or homes in the afternoon throughout the seventh lunar month.