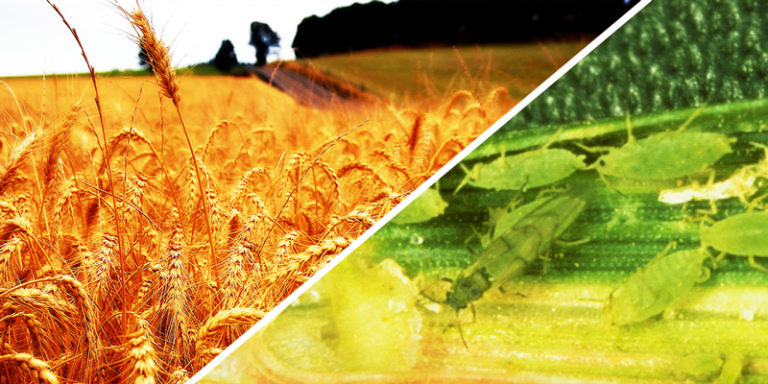 Crop losses for critical food grains will increase substantially with global warming, as rising temperatures boost the metabolism and population growth of insect pests, new research says. Scott Merrill of the University of Vermont, a co-author of the study published in Science, said:

“Climate change will have a negative impact on crops; we are going to see increased pest pressure from climate change.”

Researchers looked at how the insect pests that attack three staple crops — rice, maize, and wheat — would respond under a variety of climate scenarios. They found that rising global temperatures would lead to an increase in crop losses from insects, especially in temperate regions. Losses are projected to rise by 10-25 percent per degree of warming.

Just a 2-degree rise in global average temperature will result in total crop losses of approximately 213 million tons for the three grains, the researchers say.

The losses will come from an increase in insect metabolism, and from faster insect population growth rates. The link with metabolism is straightforward. Merrill, a researcher in UVM’s Dept. of Plant and Soil Science and Gund Institute for Environment, said:

“When the temperature increases, the insects’ metabolism increases so they have to eat more.

“That’s not good for crops.”

The link with population growth, however, is more complex. Insects have an optimal temperature where their population grows best. If the temperature is too cold or too hot, the population will grow more slowly. That is why the losses will be greatest in temperate regions, but less severe in the tropics. Merrill, an ecologist who studies plant-crop interactions, added:

“Temperate regions are not at that optimal temperature, so if the temperature increases there, populations will grow faster.

“But insects in the tropics are already close to their optimal temperature, so the populations will actually grow slower. It’s just too hot for them.”

Key grain crops to take a hit from global warming

According to the study, wheat, which is typically grown in cool climates, will suffer the most, as increased temperatures will lead to greater insect metabolism, as well as increased pest populations and survival rates over the winter. Maize, which is grown in some areas where population rates will increase and others where they will decline, will face a more uneven future.

In rice, which is mostly grown in warm tropical environments, crop losses will actually stabilize if average temperatures rise above 3oC, as population growth drops, counteracting the effect of increased metabolism in the pests. Merrill said:

“Rice losses will taper off as the temperature rises above a certain point.”

That means that the most substantial yield declines will happen in some of the world’s most productive agricultural regions. Merrill explained:

“The overall picture is, if you’re growing a lot of food in a temperate region, you’re going to be hit hardest.”

Curtis Deutsch of the University of Washington, who co-led the study with Joshua Tewksbury, said:

“I hope our results demonstrate the importance of collecting more data on how pests will impact crop losses in a warming world — because collectively, our choice now is not whether or not we will allow warming to occur, but how much warming we’re willing to tolerate.”

France, China, and the United States, which produce most of the world’s maize, are among the countries that are expected to experience the largest increases in crop losses from insect pests because of global warming. France and China, as major producers of wheat and rice, respectively, are also expected to face large increases in losses of those grains as well. Merrill said:

“The areas that produce the most grain, especially wheat and corn — the U.S., France, and China — are going to be hit hardest.”

Reduced yields in these three staple crops are a particular concern because so many people around the world rely on them. Together, they account for 42 percent of direct calories consumed by humans worldwide. Increased crop losses will result in a rise in food insecurity, especially in those parts of the world where it is already rife, and could lead to conflict.

As farmers adapt to a changing climate from global warming by shifting planting dates or switching to new cultivars, they will also have to find ways to deal with pests by introducing new crop rotations or using more pesticides. But not all of these strategies will be available to all farmers. Merrill added:

“There are a lot of things richer countries can do to reduce the effect by increasing pesticide use or expanding integrated pest management strategies.

“But poorer countries that rely on these crops as staple grains will have a harder time.”

Provided by: University of Vermont [Note: Materials may be edited for content and length.]