How the Imperial Examiner Faced a Candidate 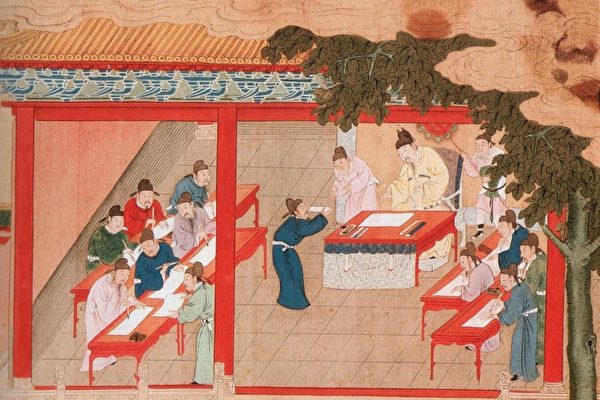 Xu Tsunzhai, a grand scholar in the Ming Dynasty, became a government official when he was only 20 years old. (Image: via Wikimedia Commons)

Palace Examination was the highest level of examination in the ancient Chinese civil service examination system. The first place winner would receive the title “Zhuang Yuan,” the second “Bang Yan,” and the third “Tan Hua” from the Imperial Examiner. Xu Tsunzhai, a grand scholar in the Ming Dynasty, won the third place as “Tan Hua” when he was 20 years old. Therefore, he started his official career very early.

Before he turned 30, one time Xu went to Zhejiang Province to inspect the educational administration and served as Chief Examiner during the Imperial Exam. A student took the exam and quoted one sentence from classic literature in his essay, describing that Yan Hui took Confucius as the goal for his study, but regretted that he was far away from the virtue and excellence of Confucius.

The Imperial Examiner gets corrected

When Xu read this sentence, he couldn’t think of the source for it. He marked it as “Fabrication” and ranked the student as 4th place. After the student saw the examiner’s comments, he took the article with him to chat with Xu Tsunzhai. He said: “Master, thank you for your advice. But I’d like to say that this sentence came from “Model Sayings” written by Yang Xiong in the Han Dynasty. I did not make it up.”

When Xu Tsunzhai realized that he had made a mistake, he immediately stood up and bowed with his hands folded together. He said: “I became an official at a very young age. I did not have time to learn about it. Today, I am glad that you have helped to teach me.”

Xu Tsunzhai immediately corrected his mistake and changed the student’s ranking to first place. People were amazed at Xu Tsunzhai’s modesty and gratitude.

The ancients said: “If you know what is wrong and correct your mistakes, this is great kindness.”