Lawyer Yu Wensheng: Today, Anyone in China Could Be the Next Victim 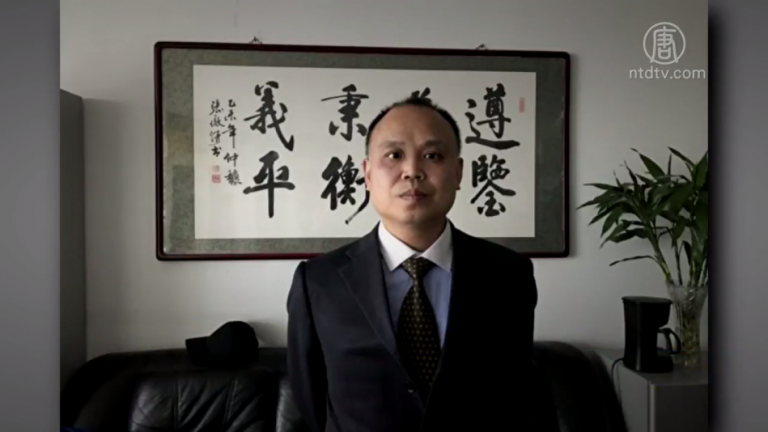 On July 9, 2015, the Chinese government began to purge human rights lawyers, activists, and legal personnel by illegally sending them to prison. This became known as the 709 crackdown. Yu Wensheng, a 50-year-old Beijing lawyer, was arrested on August 6, 2015, and released after 24 hours. Later, he became the defense attorney for lawyer Wang Quanzhang, who has now gone missing and is presumed to be incarcerated.

Reporter: What is your daily source of information? Do you watch television?

Yu Wensheng: My daily information comes mainly from the Internet news networks. First, I look at the domestic news, as you can get some information and the political information is still somewhat authentic. Then you have to break through the great firewall so I can also learn about the outside world through media such as WeChat or other foreign chat software.

I don’t watch very much on television. I think that China’s TV is polarized into either an entertaining program or a brainwashing program. For example, in the anti-Japanese drama, they portray that the Kuomintang fought against the Japanese and the Chinese Communist Party (CCP) did not. It is a mistake to say that the CCP did not fight against the Japanese. Some things are not in line with historical facts, and many brainwashing TV dramas have completely obliterated the historical truth by being completely deceptive if you do not know the truth.

Reporter: Would you say that the education you received as a child was the propaganda of the Party media?

Yu Wensheng: Yes, we have all received too much brainwashing education since childhood. When I was young, I was determined to dedicate my life to China, to fight against all the bad things and the bad people, to liberate Taiwan, and to liberate the United States. I was told that the American people live in such misery, they suffer too much. When I was young, the CCP fed me this information!

After reaching 11 or 12 years old, I felt that I had been cheated. My family was better than average. My father worked for a travel agency. He could read Hong Kong and Taiwanese newspapers. He was busy during the day and brought them home to read at night. He didn’t show them to us, but after he went to sleep, I got up and read them, so I was exposed to foreign democratic ideas. Slowly, I began to doubt the education I had received.

The authorities have total control of the media and do not allow others to run newspapers, magazines, or radio stations, so no one has the right to speak. The CCP can say whatever they choose. Now, the state Party broadcast media, CCTV, often shows people pleading guilty on television, but it is illegal to make a judgment on the case before the court ruling.

Reporter: So, in your opinion, how can China’s current situation be changed?

Yu Wensheng: First of all, the people must wake up to the true situation in China. Nowadays, the Chinese are mentally numbed, and they only think of protecting themselves and no one else.

If no one speaks up, how can you face a powerful political power alone? It’s impossible! Everyone must wake up in order to change this social system.

There are not many people who are awakening at the moment. I have not rushed to the forefront yet, but I have still been arrested. By their actions, it is the authorities who have trained me to be a lawyer for the front runners of human rights and thus cultivated me into a human rights defender.

Reporter: Can you talk about your relationship with the 709 incident?

Yu Wensheng: In the “709” incident, many lawyers were arrested, and so was I.

During the night of August 6th, the police broke into my house and arrested me. In the 24 hours I was detained, I was subjected to various forms of abuse, very inhumane treatment, including not being allowed to go to the restroom. I was handcuffed with my hands behind my back for the first 10 hours and then with my hands in the front for 14 hours — I felt like I was being tortured.

I went to Tianjin a dozen times during the investigation stage. I asked to meet with Wang Quanzhang, but they used “national security” as an excuse to turn down my request.

Within a few days in China, the authorities suppressed the lawyers and human rights defenders related to”709.” This was something happening only in a fascist country, but it also happens in China in the 21st century.

“709” received great attention from the international community. I admire those who got involved in this work before and after the incident. As the defender of Wang Quanzhang, I have made certain efforts. I will continue to work hard to get him home as soon as possible. I am the legal representative of Wang Quanzhang’s wife, Li Wenzu. She is a very strong woman and is recognized by people from all walks of life.

Reporter: Are you currently being monitored?

Yu Wensheng: After I was released, the authorities strictly monitored me. I was surrounded by surveillance. Sometimes, I was followed. Now, I am used to it. I am not afraid of being tracked. What else is there to fear? I am not afraid. But actually, I have to consider the safety of others.

Once when I went to a public space with a few friends to eat, the police called the friend sitting next to me and asked him where he was eating, asked whether he was eating with a sensitive person, and told him to go home. My friend looked up and saw a camera above his head. We were clearly seen eating here.

Reporter: How do you protect your wife and children in the current state?

Yu Wensheng: Before “709”, many of my friends persuaded me to let my wife and children go abroad because the family members of lawyers are often being implicated. But my wife is not willing to leave me.

I don’t want to go abroad. I can still do some things in China and make a contribution to the cause of human rights. But in today’s China, no one can guarantee true safety. Because of the authorities, I can’t protect my wife and children with my own strength. Nobody can offer protection for anyone else.

The last time, the police broke into my house and removed me, right in front of my wife and children. They offered no explanation for my removal and behaved as if they had the right to act that way because they were not “being listened to.” The police had guns drawn in their hands. In order to maintain CCP rule, they can kill anyone at any time. It is always possible that one day they can deprive us of our lives. In their eyes, human life does not matter, and the only thing that matters is power.

Under the CCP’s rule, many people who desire democracy will die. There are too many of these people. Up to now, [the number of] people who have died an abnormal death is beyond calculation.

As far as I know, the lawyers of “709” have been tortured. This is the conventional means of dealing with political prisoners. In order to maintain its rule, the authorities must make you surrender once you are caught. If you do not give in, you will experience something worse than death.

If one day they take me away, I will face it calmly, even if I have to give up my life. At that time, I hope that the international community and defenders of citizens will take care of my wife and children.

Yu Wensheng was stripped of his legal license and once again arrested earlier this year for “incitement to subvert state power” and “obstruction of officials in the course of their duty.” Regarding the lawyers hired to defend him, his wife told RFA: “They weren’t allowed to see him, nor to read the case files.” He has been indicted on subversion charges and will likely face trial.