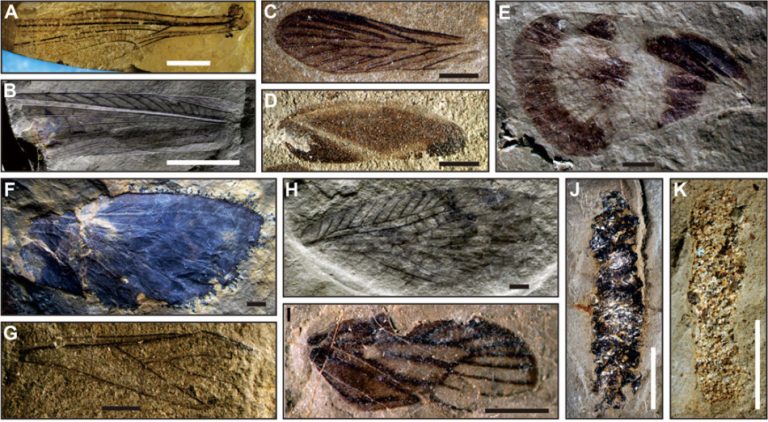 Recently, scientists from China and the UK reported two Middle-Late Triassic entomofaunas, providing not only the earliest records of several modern insect elements, but also new insights into the early evolution of freshwater ecosystems. This study confirms that holometabolous and aquatic insects experienced extraordinary diversification about 237 million years ago. The research was published in Science Advances.

Dr. Zheng Daran and Prof. Wang Bo, researchers at the Nanjing Institute of Geology and Palaeontology of the Chinese Academy of Sciences (NIGPAS), discovered a late Ladinian Tongchuan entomofauna and a Carnian Karamay entomofauna in northwestern China. These entomofaunas provide new evidence for understanding the process of insect diversification.

The Tongchuan entomofauna includes diverse fossil beetles with bodies, making them potential key calibration points for the molecular phylogenetic analysis of beetle phylogeny. Another interesting discovery is the earliest caddisfly cases (Trichoptera) in both entomofaunas.

The true Trichoptera was thought to have diverged from Amphiesmenoptera in the earliest Jurassic. The Holometabola are the most diverse insects in the Tongchuan and Karamay entomofaunas and are represented by diverse beetles and scorpionflies. Holometabola were thought to have become dominant in the global entomofauna starting in the mid-Mesozoic.

Thus, its high diversity and abundance in Tongchuan and Karamay are relatively unexpected, revealing a radiation of Holometabola during the Middle-Late  Triassic. In addition, water boatmen are abundant in the Karamay entomofauna, making them the earliest record of aquatic bugs. These aquatic insects developed new herbivore and carnivore guilds that persist to the present.

The diversification of aquatic insects was thought to be part of the Mesozoic Lacustrine Revolution, which dates to the Middle Mesozoic. The current study suggests, however, that this diversification had already begun by the Middle-Late Triassic, thus providing new insights into the early evolution of freshwater ecosystems.

Compared to other insects, Holometabola were probably more resilient to Early Triassic environmental disturbances, since their development would have allowed greater buffering from environmental variability.

After the Early Triassic, various plants started to appear during the Middle-Late Triassic and spread later, probably further contributing to the radiation of holometabolous and aquatic insects.

Provided by: Chinese Academy of Sciences  [Note: Materials may be edited for content and length.]