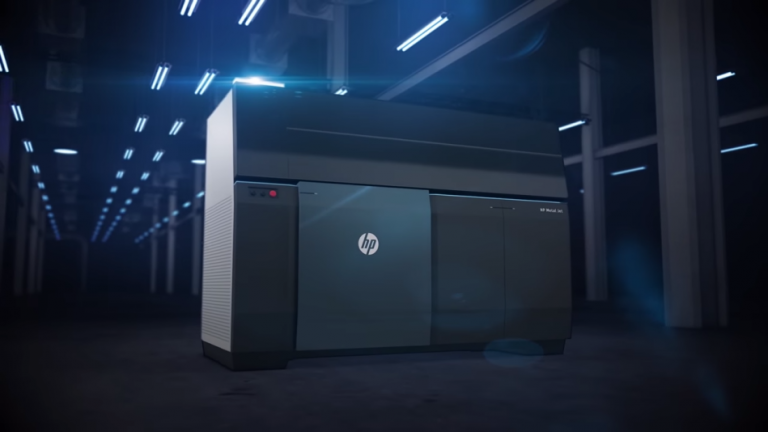 Moving into the 3D metal printing business was one of HP's top goals of 2018. (Image: Screenshot via YouTube)

With the 3D printing market exploding over the past few years, several companies have begun manufacturing 3D printers aimed at specific industries. Not wanting to lose out on the huge market potential, HP recently launched a 3D version that is capable of printing steel objects.

HP’s steel printer is largely targeted at small-scale industrial businesses that typically manufacture about 50,000 to 70,000 units per day. Moving into the 3D metal printing business was one of the top goals of the company in 2018.

HP believes that its expertise in manufacturing traditional ink printers will give it an advantage in the 3D printing market. Both the 2D and 3D units share several similar components, like the nozzle used to spray the material. As such, the company is positioned to manufacture nozzles very cheaply compared to a business that is just starting out manufacturing 3D printers.

HP already has a wide network of experienced technicians who service their 2D printers. With a little additional training, these technicians can be made ready to repair and service their 3D printer clients as well. Both of these factors should eventually give HP a significant advantage in the field of metal printers.

The 3D steel printer will be commercially available from 2020 at an estimated starting price of US$399,000. By 2021, it will reportedly have a broad rollout. For now, HP has started accepting preorders. The company aims to eventually manufacture units capable of printing other metals in addition to steel.

Though HP’s steel printer is aimed at businesses, many companies are at work to create an affordable 3D home version that would allow people to print anything they want, whether it be a steel spoon for use in the kitchen or a custom pizza.

Right now, most 3D desktop printers support the creation of items made from plastic or similar materials. Only a few allow the use of multiple materials. And even then, the number of materials they can use is pretty limited.

However, many experts believe that we will have the ability to print literally anything we want within a decade, whether organic or inorganic. And when that happens, most households will have a 3D printer just the way they have smartphones, cars, and such.

“This transformation is not going to happen overnight. There are still obstacles that we, as an industry, need to overcome. However, we have made great advancements in the past few years, and can plan to see this market follow a similar trajectory of progress as other rapidly emerging technologies have in the past,” Futurism quotes Bernard Luthi, CEO of electronic retailing business Monoprice.

The introduction of a 3D printer that can print anything will revolutionize the world in ways most people have yet to understand. What manufacturers like HP need to work on is making such 3D units affordable and easy to use. Once the price point is taken care of, the sales of such units will easily pick up by themselves. After all, not many people can say no to the convenience of owning a gadget that can create anything they want.