Aboriginals Lived in Western Desert in Australia 50,000 Years Ago 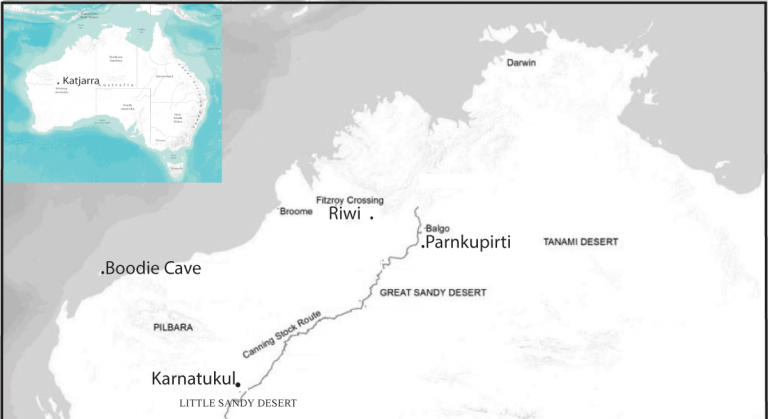 'We found in deposits dating back around 43,000 years ago an early backed microlith, a hafted multifunctional tool which could be used as either a spear barb or for wood-working.' (Image: via PLOS)

Archaeologists from the University of Western Australia working with Traditional Custodians from the Birriliburru Indigenous Protected Area (IPA) have recovered evidence that aboriginals lived in the Australian arid zone 50,000 years ago. This is 10,000 years earlier than previously understood for the interior deserts of Australia, and among some of the earliest known evidence for people living in deserts anywhere in the world.

The remote Carnarvon Ranges are near the Canning Stock Route. Evidence from the Karnatukul site (previously known as Serpents Glen) indicates that aboriginals lived in this interior desert from very early in the settlement of Australia and that they remained in these ranges during the last Ice Age.

“We found in deposits dating back around 43,000 years ago an early backed microlith, a hafted multifunctional tool which could be used as either a spear barb or for wood-working.

“This is more than 15,000 years earlier than other known Australian examples of this tool type. Residue found on the tool indicates that hafting technology was practised much earlier than had been previously demonstrated in Australia.

“Tools such as this are found across most of southern and eastern Australia, but most are dated to the last 4,000 years.”

Professor McDonald said the findings supported the notion that the first aboriginals adapted with ingenuity and flexibility as they dispersed into every bioregion of Australia within 10 millennia after arriving on this continent.

“The fact that we have also been able to demonstrate a range of symbolic behaviours in the last 1,000 years — with rock art production and extraordinarily high levels of site use at this same time — demonstrates the continuity and complexity of long-term connections by Australian desert peoples.”

“It’s enthralling to see scientific and Aboriginal narratives working together to create an extraordinary new canvas for the vast desert landscapes of the Australian imagination.”

Provided by: University of Western Australia [Note: Materials may be edited for content and length.]