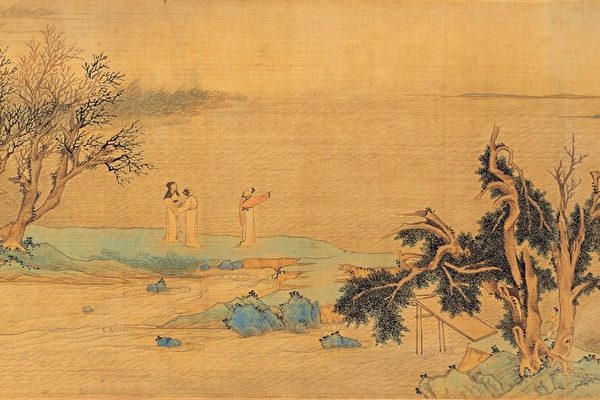 Su Dongpo was a noted scholar of the Northern Song Dynasty who used his wisdom to solve problems for the ordinary people. (Image: via The Epoch Times)

Su Dongpo was a noted scholar of the Northern Song Dynasty. He had many accomplishments and excelled at poetry, verse, calligraphy, and painting. In addition to his artistic achievements, he also used his wisdom to solve problems for the ordinary people.

A story that took place during Su Dongpo’s tenure in Hangzhou.

Su Dongpo was appointed an official in Hangzhou when he was 37 years old. One day in early Autumn with the chrysanthemums blooming, he entertained his friends with good food, wine, and poetry. They suddenly heard loud noises from a crowd in front of the government building. It turned out to be a civil case that arose from a dispute between two people over money. Su Dongpo put on his official attire and went out to give his judgment in the case.

A merchant had loaned 300 coins to his good friend and neighbor to make handheld folding fans, which were very popular items. The merchant’s daughter was getting married and he needed his money back. But his friend, Zhang, had already spent the money on the materials to make the fans. Unfortunately, after all the fans were made, the summer turned out to be wet and cold so people were still wearing long sleeves. The fans were being stored in a trunk and had started to get moldy since there was no demand for them.

Su Dongpo said: “Don’t worry. Tell me all the details and I’ll make a decision afterward.”

The merchant said: “I worked hard to earn 300 coins. I loaned that money interest-free to my neighbor and friend Zhang so he could make fans to sell. He was supposed to repay me after summer was over. Now, summer is gone and our daughter is getting married, but Zhang refuses to pay what he owes.”

Zhang said sadly: “Yes, Your Honor, my family has been making fans for generations. Unfortunately, my father died this year and I needed money badly. I wanted to sell fans for the season. Thus, I borrowed the money from my friend. I bought the materials and made a lot of folding fans. I didn’t expect it to rain like this. When summer arrived, everyone was still wearing long sleeves! No one needs a fan. The fans are in the trunk getting mildew spots and I can’t sell them anymore. I don’t think anyone will want them. I really can’t afford to pay back the loan!” Zhang shed many tears after his explanation.

Su thought Zhang had a good excuse, but he also knew that one has to pay what one owes. He pondered for a moment and then said: “Zhang, you can give all your fans to your friend as payment.”

The merchant immediately refused and said: “Those fans are worthless and I don’t want them. Your Honor, please ask him to pay me 300 coins.”

The people who listened to the live courtroom case also talked about the matter: “Su Dongpo is a famous scholar, so how could he make such a decision?”

Then Su Dongpo said: “Zhang, you go home and bring the fans here.” Zhang followed Su Dongpo’s order immediately. Then, Su Dongpo took the fans, opened them one by one, and put them on the table. Meanwhile, the court messenger began to prepare ink water for painting.

Su Dongpo pointed to the fans and told Zhang: “You go to the streets and say that these are the fans with Su Dongpo’s paintings and see how they sell.” Zhang gratefully accepted the fans. He knew that these fans could sell for at least a thousand coins apiece. Sure enough, people treasured Su Dongpo’s paintings so much that they rushed to buy them. Within an hour, Zhang sold all 30 fans.

After Zhang paid the merchant his share plus interest, Su Dongpo gave the rest of the money to Zhang as capital to continue his next business venture. In this way, a difficult case was easily settled.

The story of “Dongpo Painting Fans” quickly spread throughout the streets of Hangzhou. Folding fans in Hangzhou came in only two varieties at that time — black or white. After Su Dongpo painted his fans, people learned from it. Some painted fans with flowers, some painted characters, and some painted mountains and rivers. Thus, a fan became something not only to keep people cool, but also something enjoyable to look at. Painted fans became so popular that the custom of painting and calligraphy in Hangzhou has been passed down from the Northern Song Dynasty to the present.