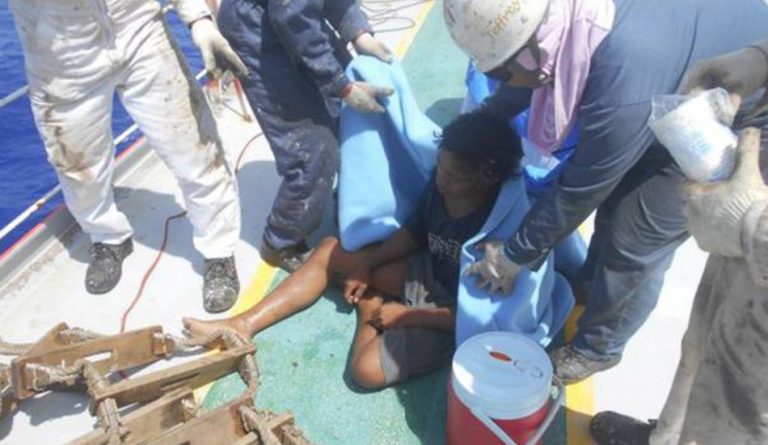 An 18-year-old Indonesian teenager is garnering worldwide media attention after he survived adrift in the open seas for an incredible 49 days. (Image: via Indonesian Council General, Osaka)

An 18-year-old Indonesian teenager is garnering worldwide media attention after he survived adrift in the open seas for an incredible 49 days. He used wood from the vessel to cook fish caught from the sea.

The teenager, named Aldi Novel Adilang, was tasked with lighting the floating ship’s lamps that attracted the fish into a trap. The company used to supply him with fresh water, food, and fuel every week while collecting the fish that he caught.

On July 14, Adilang was 77 miles off the coast of Indonesia and was doing his job as usual when his vessel was rocked by heavy winds. The moorings snapped and Adilang found himself adrift in open waters. Since he only had a few supplies left, food and water were one of the biggest challenges. Once the food ran out, he started eating the fish caught from the sea.

“After he ran out of cooking gas, he burned the rompong’s wooden fences to make fire for cooking. He drank by sipping water from his clothes,” the Telegraph quotes the Indonesian consul general in Osaka.

As days passed, Adilang started wondering whether he would ever come back to his home again. However, he did not lose hope and held on to the belief that he would be rescued soon. Meanwhile, his mother continued to pray for her son’s return.

“[He] said he had been scared and often cried while adrift… Every time he saw a large ship, he said, he was hopeful, but more than 10 ships had sailed past him. None of them stopped or saw [him],” the BBC quotes Fajar Firdaus, an Indonesian diplomat in Japan.

On August 31, Adilang saw a Panamanian vessel passing through. He immediately sent a radio signal. Fortunately, the crew detected his signal and rescued the Indonesian teenager. Adilang was found in the waters of Guam and had been adrift for about 49 days when rescued. He was taken to Japan and eventually landed back at home on September 6.

Adilang’s survival was not the only incident that garnered media attention in September. The story of an Indian navy officer’s fight against stormy seas for three days also captured the attention of the masses.

Thirty-nine-year-old Abhilash Tomy was participating in the Golden Globe Race when his non-motorized yacht got damaged by a storm. For the next three days, he was adrift on the 32-foot yacht. Meanwhile, Tomy was unable to move since his back was injured. He had used a satellite phone to text the authorities and request an immediate evacuation.

“The sea was unbelievably rough. Me and my boat Thuriya were pitched against nature’s might. I survived because of my sailing skills, the soldier bit in me, and my naval training cut-in for that fight,” the Business Standard quotes Tomy.

Though the navy had deployed several vessels to rescue him, all attempts failed miserably on the first few days. But on the third day, the French fishing vessel Osiris discovered Tomy’s yacht floating in the sea. He was eventually taken to Mauritius for medical treatment.

Interestingly, Osiris is the name for the ancient Egyptian god of rebirth. And it definitely piques our curiosity to think that Tomy avoided death and was kind of “reborn.”