Art World in Shock After Million Dollar Painting Shreds Itself 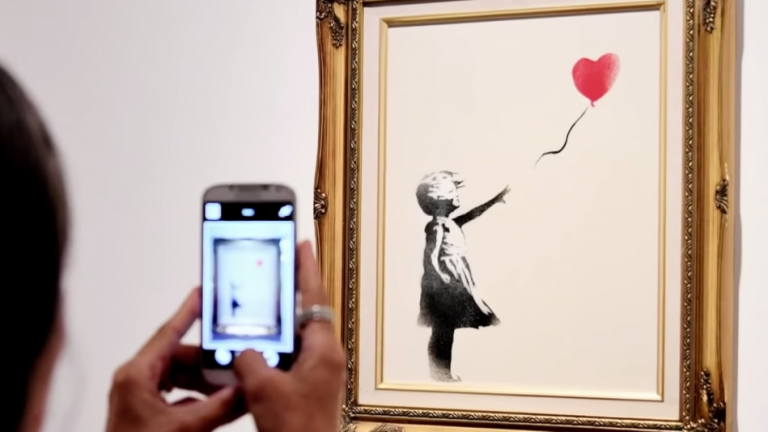 Girl with Balloon became one of the most popular paintings by British artist Banksy. (Image: Screenshot via YouTube)

Artists are known to pull off some crazy stunts during the auction of their paintings. But one artist may have taken things too far by having his painting self-destruct immediately after the auction. As the stunned bidders watched on, the painting shreds itself by a shredder hidden inside the frame.

Painting shreds itself after auction

During a recent auction at Sotheby’s, a painting by British artist Banksy was being sold off. Called Girl with Balloon, the painting is one of the most popular of Banksy’s creations and had generated huge interest among buyers.

After intense bidding, the painting was sold off for US$1.4 million. However, as soon as it was sold, people at the auction witnessed something shocking — the million dollar painting shreds itself.

“An alarm began to sound. There were lots of VIPs in the room. Everyone was bewildered and gobsmacked as technicians rushed over to take the work away. We heard that there had been a skirmish outside between security and a man in black, which fuelled speculation that Banksy had been there,” Evening Standard quotes an art writer who was present during the auction.

Banksy shared a video of the incident on his Instagram page, (mis) quoting famous painter Picasso that the “urge to destroy is also a creative urge.” By tearing his painting into pieces, Banksy meant to turn the auction itself into a work of art.

CNN quotes Sotheby’s as saying: “It is increasingly common in the contemporary art world for artists to deem their frames integral to the artwork, as was the case in this instance. The certificate from the artist’s studio for the present work states that the frame is ‘integral to the piece,’” while also adding: “We had no prior knowledge of this event and were not in any way involved.” The auction house also noted that it was the first time in their history that an artwork was torn.

Setting up the stunt and increased valuation

It is the frame of the painting that held the key to the stunt. Banksy had integrated a shredder into the frame that no one else was aware of. And since artists are known to require that their paintings be sold off without changing the frames, auction houses typically do not conduct any checks on the frames. This came in handy at Sotheby’s as the painting reached the auction spot without anyone detecting the hidden shredder.

Instead of losing value, the stunt seems to have increased the price of the painting thanks to the huge media interest it has generated. “The auction result will only propel this [price surge] further and given the media attention this stunt has received, the lucky buyer would see a great return on the £1.02M they paid last night; this is now part of Art History in its shredded state and we’d estimate Banksy has added at a minimum 50 percent to its value, possibly as high as being worth £2M+,” Evening Standard quotes Joey Syer, co-founder of www.MyArtBroker.com.

Identities of the seller and buyer are being kept a secret by Sotheby’s. The auction house is reportedly talking with both parties and deciding what to do next after the painting was shredded.