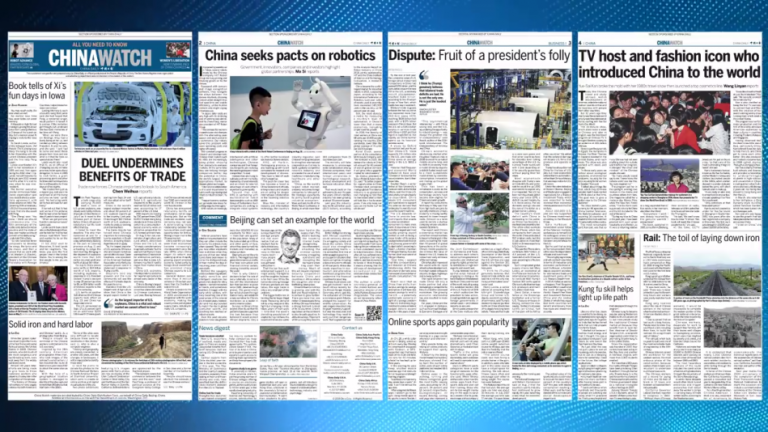 Political experts and intelligence agencies had anticipated that the Chinese would try to influence public opinion against the current U.S. administration once the trade war intensified. (Image: Screenshot via YouTube)

The Chinese Communist Party (CCP) is increasingly trying to influence the world’s perception through a huge, ongoing worldwide propaganda campaign. A foreign journalist of China Daily, the CCP’s English media outlet, told National Public Radio that in the past, the motto of the media was: “Let China go to the world; let the world know about China.” Now the motto has become: “Reporting China; influencing the world.” Another foreign journalist said there is a rule set by the government that President Xi Jinping is always to be in the headlines no matter what is happening.

Since 2008, the CCP has thrown billions of dollars at the state media, hiring journalists and public relations companies. For example, Xinhua News Agency expanded its overseas reporter stations from 100 a decade ago to 180 in 2015. China Radio International has also expanded to 61 languages and 2,700 hours of programming a day.

Ban Zhiyuan, a researcher at Hong Kong University’s China Media Research Program, said that the message from the Chinese media is: “The rise of China is a blessing to all countries.” Ban Zhiyuan further said: ”The CCP media promoted China’s return to the center of the world. All of that is linked to the CCP’s important foreign policy of ‘One Belt, One Road.'”

Independent analyst Wu Qiang said that such propaganda may make CCP officials so confident that they think China can win a trade war with the United States. “The leaders of the Chinese Communist Party have exaggerated China’s soft power so much that they believe their own propaganda,” Wu Qiang said sarcastically. “It is the U.S.-China trade war that broke their illusions.” Wu Qiang said that it is very difficult for the CCP to come up with ideas that appeal to Western audiences. Part of the reason is that the CCP publicly rejects universal values and says that universal values are not suitable for China.

Wu Qiang said that China has hundreds of years of political and philosophical traditions that may replace Western universal values, but the CCP does not intend to revive these traditions.

Recently, Western countries have become alert to the CCP’s official media as a means of communication for political influence. On October 4, U.S. Vice President Pence delivered a long speech on Sino-U.S. relations.

Pence said that the CCP is attempting to infiltrate American culture in an attempt to influence American public opinion. Pence said: “The Chinese Communist Party has spent billions of dollars on propaganda in the United States and other countries. For example, China Radio International has more than 30 broadcasting sites in the United States; many of them are in important cities, broadcasting those pro-Beijing programs. The CCP’s global television network covers more than 75 million Americans.” Pence went on to say: “These news agencies in the United States received instructions directly from party leaders. As the top leaders of the Chinese Communist Party visited the media center, the media agencies of the Party and the government are propaganda front lines and must show their absolute loyalty. This is why last month, the U.S. Department of Justice ordered them to register as foreign agents.”