The National Museum of Taiwan History 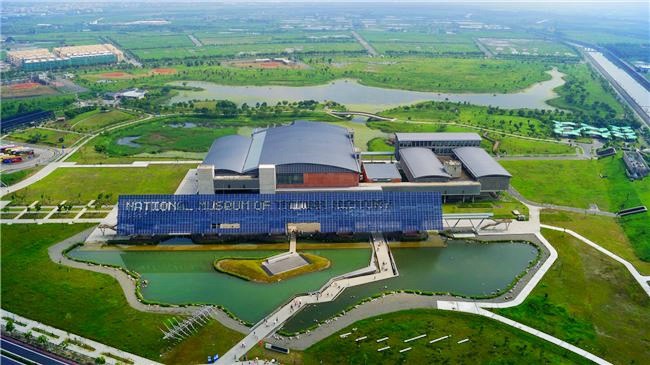 Opening in 2011 after 12 years of planning and construction, the National Museum of Taiwan History is a great destination for a comprehensive overview of Taiwan’s history, which was largely ignored in the past because of political reasons.

Located in southern Taiwan’s Tainan City and covering an area of 20 hectares, the National Museum of Taiwan History is composed of three parts: the Museum Park, the Exhibition and Education Building, and the Administration and Collection Building.

Please watch the following video of the National Museum of Taiwan History.

Upon arrival at the museum, visitors first encounter a huge array of solar panels bearing the museum’s name in English. This huge array of panels, the pond, the water stage, as well as the museum, feature the four images related to Taiwan: “Sailing” (渡海), “Sandbanks” (鯤鯓), “Cloud Wall” (雲牆), and “Integration” (融合).

The pond in the front of the museum symbolizes the Taiwan Strait that early immigrants crossed when migrating from China. The Water Stage on the Grand Plaza represents the sandbank, which portrays early immigrants’ first impression of Taiwan when approaching the island.

The Cloud Wall is made up of 1,755 panels, including 1,350 solar panels and 405 pieces of stamped glass, which signify the immigrates’ crossing of the Taiwan Strait, often referred to as the Black Ditch (黑水溝). The Cloud Wall is also used to generate solar power for the museum.

The Administration and Collection Building (行政典藏大樓) is mainly constructed of stone walls and columns, which was designed according to a concept originating from Taiwan aborigines’ stilt houses. It is Taiwan’s first large-scale building constructed with a load-bearing wall, reinforced steel columns, and three-way prestressed structures.

The design of the Exhibition and Education Building (展示教育大樓) was based on a concept of the traditional red-brick four-section compound with a base that combines the columns of Taiwan aborigines’ stilt houses.

Based upon the concepts of “Knowledge (知識臺灣),” “Nature (自然臺灣),” “Folklore(鄉土臺灣),” and “Performance (展演臺灣),” the Museum Park includes two lakes, a bamboo house, an ecological education center, and a hill. The park is so unique and attractive that it is worth visiting for its own sake.

The primary focus of the museum is the permanent exhibition “Our Land, Our People: The Story of Taiwan (斯土斯民–臺灣的故事),” which takes up the entire second floor of the Exhibition & Education Building.

The exhibition is divided into seven sessions with different themes based on important periods in Taiwan’s history: “Our Land, Our People: The Story of Taiwan (斯土斯民－臺灣的故事),” “The Early Residents (早期的居民),” “Encounters Between Disparate Cultures (異文化相遇),” “Chinese Migration to Taiwan (唐山過臺灣),” “Territorial Societies and Plural Cultures (地域社會與多元文化)”, “Transformations and the New Order (鉅變與新秩序),” and “Toward a Diverse, Democratic Society (邁向多元民主社會).”  Additionally, visitors can also view the film Peering into a New Century (展望新世紀) in the permanent exhibition gallery.

By means of interactive and wax models, videos, multimedia, man-made scenery, and articles, the permanent exhibition showcases a broad overview of Taiwan’s history. In particular, the life-sized objects, such as the dockyard, religious parade, and a full-scale Japanese era street, transcend time and space, allowing visitors to experience a Taiwan from long ago.