Eric Zhi Will Not Be Deported to China, at Least for Now 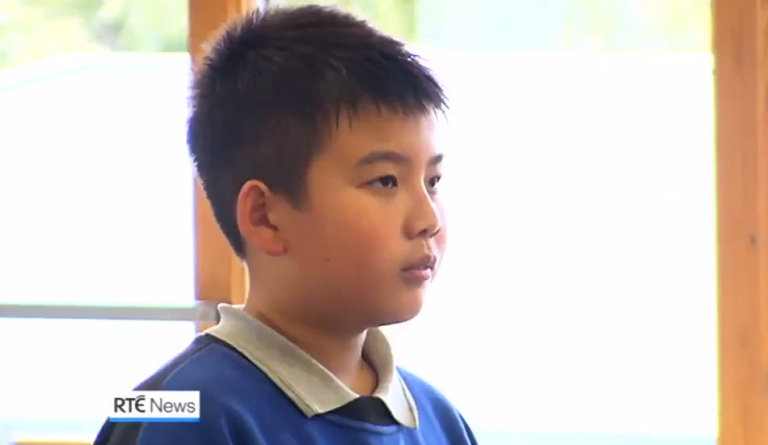 Nine-year-old Eric Zhi Ying Xue, who lives in Ireland, was supposed to be deported to China for having been born to an illegal immigrant. (Image: via Nspirement)

Nine-year-old Eric Zhi Ying Xue, who lives in Ireland, was supposed to be deported to China for having been born to an illegal immigrant. However, a government minister has intervened and temporarily blocked the deportation attempts.

Eric Zhi not going back

Eric’s mom entered Ireland illegally about 12 years ago. In 2009, she gave birth to the boy. Eric has grown up in the Irish culture all along for the past nine years. Yet, when authorities discovered that his mother was an illegal immigrant, they threatened him with deportation.

When news broke out about the government’s stance, it sparked a public outrage. Over 50,000 people signed a petition demanding Eric not be deported. “He, as far as I’m concerned, is as Irish as every other boy in this school… He is completely and absolutely assimilated into our society, into our school, into our whole community,” said Maeve Tierney, Principal of Eric’s school (BBC).

The deportation was considered because of a 2004 law that states that babies born in Ireland are not entitled to citizenship unless one of their parents is Irish. Since his mom was an illegal resident, the authorities had demanded that he be sent back together with his mother to China. The incident caught the attention of Simon Harris, Minister of Health, who visited the authorities and asked them to reconsider their decision on humanitarian grounds.

“I’ve just got some good news, very recently from the Department of Justice, which I’ve conveyed to Eric’s family, that there is no imminent threat of deportation… That’s all I ever called for, that’s all Eric’s family ever asked for, was an opportunity for a humanitarian review of the case to take place… The idea that a 9-year-old boy who is as much from Wicklow as I am, as much from Ireland as I am, would be told that he is ‘going back’ to China, a country he had never been to, was simply ludicrous,” said Simon (Irish Times).

Before 2004, Irish law gave every child born in the land automatic citizenship status. This was as per the Good Friday Agreement signed between British and Irish governments in 1998. At that time, concerns of illegals flooding Ireland was minimal.

In 1999, only 2 percent of babies born in Ireland had non-national parents. However, people started becoming concerned in 2003 after it was discovered that 20 percent of babies born during the year had non-national parents. This triggered a strong demand for scrapping the 1998 law, as people and the government realized that illegals were abusing the system to secure citizenship for their children. As a consequence, the then-Irish Prime Minister, Bertie Ahern, argued for an end to the policy.

He found immense support from maternity hospitals in Dublin, which warned that many non-EU pregnant women were showing up in their wards. A referendum was held in which 79 percent of the Irish voters supported ending the automatic citizenships rights given to babies.

While the current law does have merit in that it prevents Ireland from being taken advantage of through citizenship loopholes, Eric is a special case that deserves an exception. After all, to pull out a child who has lived his entire life in Ireland and send him “back” to Communist China seems a bit too harsh.