Paranoid Chinese Reporter Arrested in the UK for Assault 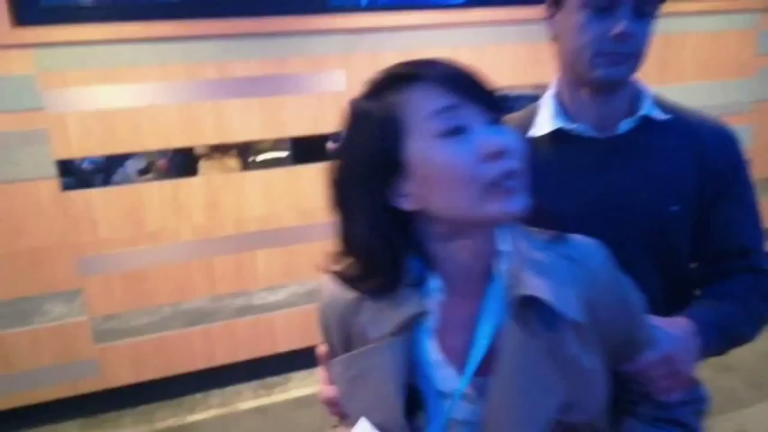 A Chinese reporter has been charged with assault by the UK police after she slapped an attendee at a conference that criticized China’s totalitarian rule. (Image: Screenshot via YouTube)

A Chinese reporter has been charged with assault by the UK police after she slapped an attendee at a conference in September who criticized China’s totalitarian rule. Thanks to the increasing nationalistic fervor among the Chinese, the reporter has apparently raked in sympathy from media and the public.

Kong Linlin, a CCTV journalist, was attending an event about Hong Kong’s political freedom held in Birmingham. The presenters discussed issues like freedom of speech and rule of law in Hong Kong. Benedict Rogers, the founder of Hong Kong Watch, criticized the Chinese government’s authoritarian regime. That is when Kong started hurling abuses.

“You are a liar. You are anti-China. You want to separate China. And you are not even Chinese. The rest are all traitors,” said Kong (South China Morning Post). When Enoch Lieu, a UK conservative party member, asked her to leave the event, she slapped him. Kong was arrested by the police and taken into custody. But the Chinese embassy intervened and got her out. She is expected to appear before the court to face charges of assault.

The Chinese reporter’s co-workers at CCTV apparently applaud her actions. The public also came out in her support on social media for “defending China against Western powers.” “CCTV spokesperson said it hopes the parties concerned in the UK will not be influenced by political forces. It urged the UK side to make a fair judgment based on facts and protect the legitimate rights of the Chinese journalist,” according to CGTN.

Kong’s outburst at the conference is a symptom of deepening hyper-nationalism infecting Chinese society. Spread through propaganda by the Communist Party, everyone, from politicians to pedestrians on the street, is slowly being injected with a poisonous ideology that frames anyone criticizing or even having a different opinion than the government as a traitor.

“Over the past few years, ‘traitor hunt’ has been a popular game in China’s state media and strictly controlled social media. From journalists to scholars, entertainers and students, ‘belittling China’ is now a serious offense. If someone snitches on a ‘culprit,’ it can result in terrifying consequences, including job loss and even physical harm,” according to South China Morning Post.

Under normal circumstances, Kong should be dismissed by CCTV for her actions that clearly go against journalist ethics. A journalist is expected to be a neutral observer of an event and report on it truthfully. To lash out at someone just because they have a different opinion goes against the very quality that is necessary for a good journalist. But due to the rabid nationalism and paranoia that has crept into the Chinese media, CCTV took the Chinese reporter’s side, thereby insulting the sanctity of journalism.

“CCTV defended her and, despite the visual evidence available, insisted that she was the one who had been blocked from expressing her opinion and then assaulted. Naturally, this claim went down well with the social media masses back home in China. They are ever eager on the lookout for ‘insults to the Chinese people,’” according to The Japan Times.

Even if Kong has to face some punishment at the hands of the UK court, she will surely return home to a hero’s welcome. And this will just set up a seductive template for Chinese journalists looking for fame — “defend China” abroad, no matter how much Beijing persecutes and tortures its own citizens, and become famous back home.