As US Sanctions Stay Tough, China Is Cozying Up to Japan 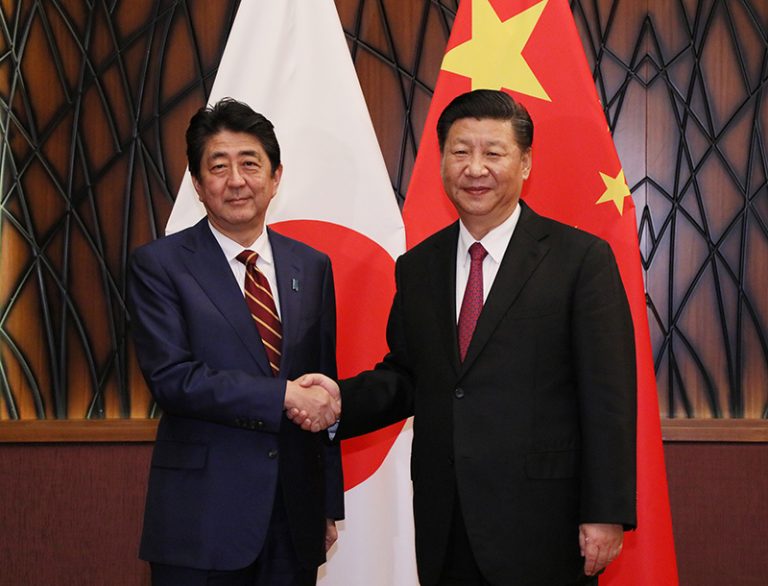 Under pressure from U.S. tariffs, Beijing is trying to forge better relationships with Japan in a bid to build a new world order with China at the center. (Image: kantei.go.jp via Wikimedia Commons)

Under pressure from U.S. tariffs, Beijing is trying to forge better relationships with Japan in a bid to build a new world order with, of course, China at the center. However, being a U.S. ally, Japan is treating China’s unusual friendliness with caution. Meanwhile, Japanese businesses are reportedly moving production units out of China to avoid the impact of U.S. tariffs.

Japan’s Prime Minister Shinzo Abe visited China in the last week of October, marking the first time in the past eight years that a Japanese leader had stepped foot in Asia’s biggest country. And while Abe was labeled an “unwelcome person” by Chinese officials just five years back, the Japanese Prime Minister was treated with grandeur and friendliness this time.

“[He was] encouraged to take part in lengthy talks and feted with lavish banquets with both Xi and Li. Top Chinese leaders were unusually straightforward in their descriptions of the sensitive timing of Abe’s visit. In a meeting with Abe on Friday, Xi said both countries should move ties in a ‘new historic direction’ while ‘instability and uncertainties are growing,’” according to South China Morning Post.

So, why has China changed its attitude toward Japan? The answer lies in the tariffs that U.S. President Trump imposed on Chinese imports recently. The move is reportedly stressing out the Chinese economy and dampening growth. This has prompted Beijing to strengthen relationships with other nations in order to build a new trade network that puts it back at the center of all activity. Japan, being its neighbor and a developed country, is a top-priority nation right now as far as Beijing is concerned.

But even though China is an appealing market for Japan, the U.S. is a far more important one. And Tokyo will not cozy up with Beijing in a way that harms its relationship with America. “The important thing is the U.S. security relationship (that) is vital for Japan… That’s non-negotiable, and that’s what Japan needs to protect while it improves its relationship with China and other countries,” Shiro Armstrong, Director of the Australia-Japan Research Center at the Australian National University, said to The New York Times.

Moving production out of China

Japanese companies have been moving out of China in the past few years due to rising wages and other costs. Just last year, 110 divisions of Japanese businesses operating in China went bankrupt because of such reasons. And with the high U.S. tariffs, several Japanese companies that sell in the U.S. and have production units in China have started shifting their operations back home or to Southeast Asian countries.

“Investment from Japan has dropped in recent years… Even two years ago we were hosting many Japanese business delegations. But now, fewer and fewer are coming. I’m worried that Japanese companies may no longer want to invest here,” Yao Jun, a senior official of the Changshu High Tech Industrial Park near Shanghai, said to South China Morning Post.

Nidec, a company that supplies automotive motors, has stated that it will move some production out of China. Components made in China are used extensively in the U.S. auto industry. The company plans to set up a new production unit in Mexico, a move that it hopes will help gain more orders from the U.S. compared to businesses that continue production in China. Companies like Panasonic, Daikin Industries, and Yokowo have also declared that they will be moving some manufacturing out of China.