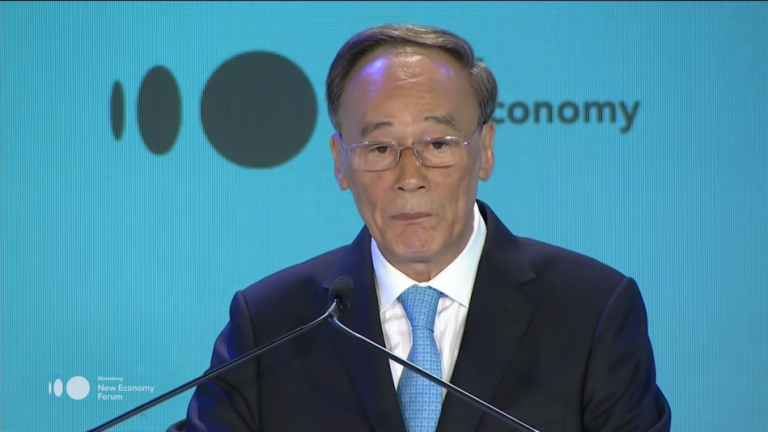 Wang Qishan, Vice-President of China, made statements indicating that Beijing is ready for talks with America to end the trade war. (Image: Screenshot via YouTube)

Beijing has indicated that it is ready for talks with America to end the trade war and arrive at a mutually-beneficial agreement. Reports also indicate that the Chinese leadership might be considering opening up the economy and allowing more foreign businesses to operate in the country, thereby bringing an end to decades of protectionist policies.

Looking forward to negotiations to resolve the trade war

“The Chinese side is ready to have discussions with the U.S. on issues of mutual concern to push for a proposal acceptable to both sides to resolve their economic and trade issues. Negativity and anger are not the way to address the problems that have emerged from globalization, nor will barriers and disputes help solve one’s own problems; instead, they will only exacerbate global market turbulence,” said Wang Qishan, Vice-President of China (South China Morning Post).

Wang made the statements at the recently concluded new economic forum in Singapore that saw the participation of about 400 business leaders. The event was hosted by American billionaire Michael Bloomberg.

Interestingly, President Donald Trump had indicated just a few days earlier that a deal was imminent. “We’ve had very good discussions with China… We’re getting very much closer to doing something. They very much want to make a deal,” Trump said in a statement (USA Today).

Opening up the market

Of late, President Xi has indicated that he is willing to open up the Chinese market to foreign investments. “Protectionism and unilateralism is rising. Multilateralism and the free trade system are under threat… China will not close its door to the world and will only become more and more open,” said Xi (The Guardian)

While Xi has made similar comments in the past only for them to turn out to be empty promises, market experts believe that the current statements might indicate an actual change in ideology. The Communist Party seems to have realized that the domestic economy can only move forward through free trade.

President Trump’s aggressive tariffs and trade sanctions are also believed to have played a role in the changing perception of Party members. Chinese citizens have developed a negative outlook on the economy and believe that their jobs and assets are at risk due to the trade war. Party officials do not want to keep the public worried for long, as this could lead to a backlash.

“(The government thinks) more needs to be squeezed from the private sector so that the state has the firepower to accelerate spending on infrastructure and investments… to counterbalance the impact of the trade war. China’s middle class… lack power to change the law or to lobby with interest groups. Without rights, assets are unprotected, and middle class has to face more uncertainties,” Zhang Lin, an independent economics commentator, said to CNN. A meeting between Trump and Xi Jinping about the trade war might come to fruition at the G20 summit later this month in Argentina.