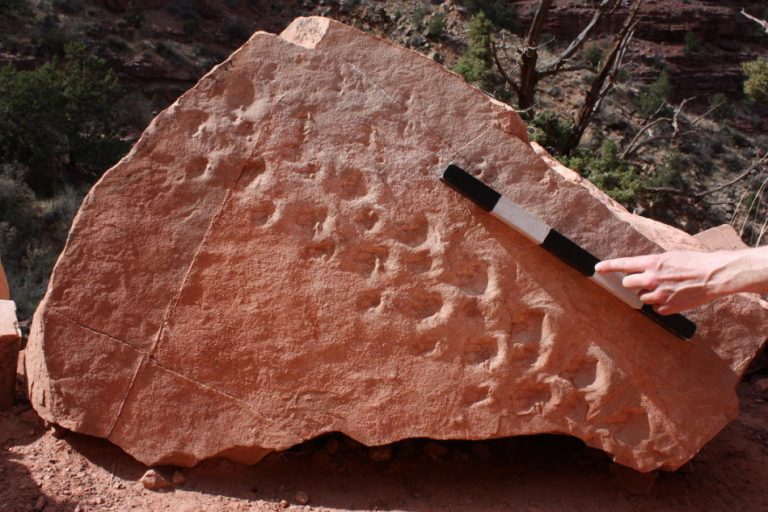 UNLV geologist Stephen Rowland discovered that a set of 28 footprints left behind by a reptile-like creature 310 million years ago are the oldest ever to be found in Grand Canyon National Park. (Image: courtesy of Stephen Rowland)

Hundreds of hikers each day pass by the fallen boulder along the Bright Angel Trail in Grand Canyon National Park. It might otherwise go unnoticed except for the 28 indentations — sloping tiny footprints left behind by a small, reptile-like creature about 310 million years ago — that cover the rock’s expansive surface.

Steve Rowland, a UNLV professor of geology who is studying the fossil trackways, said in a statement:

“It’s the oldest trackway ever discovered in the Grand Canyon in an interval of rocks that nobody thought would have trackways in it, and they’re among the earliest reptile tracks on earth.”

Rowland, who presented his findings at the recent annual meeting of the Society of Vertebrate Paleontology, said he’s not prepared to say that they’re the oldest tracks of their kind ever discovered, but it’s a possibility, as he’s still researching the discovery:

“In terms of reptile tracks, this is really old.”

He added that the tracks were created as the supercontinent Pangaea was beginning to form. Rowland was first alerted to the tracks in spring 2016 by a colleague who was hiking the trail with a group of students. The boulder ended up along the trail after the collapse of a cliff.

“My first impression was that it looked very bizarre because of the sideways motion.

When he arrived home, he made detailed drawings and began hypothesizing about the “peculiar, line-dancing gait” left behind by the creature, saying:

“One reason I’ve proposed is that the animal was walking in a very strong wind, and the wind was blowing it sideways.”

Another possibility is that the slope was too steep, and the animal sidestepped as it climbed the sand dune. Or, Rowland said, the animal was fighting with another creature, or engaged in a mating ritual:

“I don’t know if we’ll be able to rigorously choose between those possibilities.”

He plans to publish his findings along with geologist Mario Caputo of San Diego State University in January. Rowland also hopes that the boulder is soon placed in the geology museum at the Grand Canyon National Park for both scientific and interpretive purposes.

Meanwhile, Rowland said that the tiny footprints could belong to a reptile species that has never yet been discovered, adding:

“It absolutely could be that whoever was the trackmaker, his or her bones have never been recorded.”

Provided by: Natalie Bruzda, University of Nevada, Las Vegas [Note: Materials may be edited for content and length.]