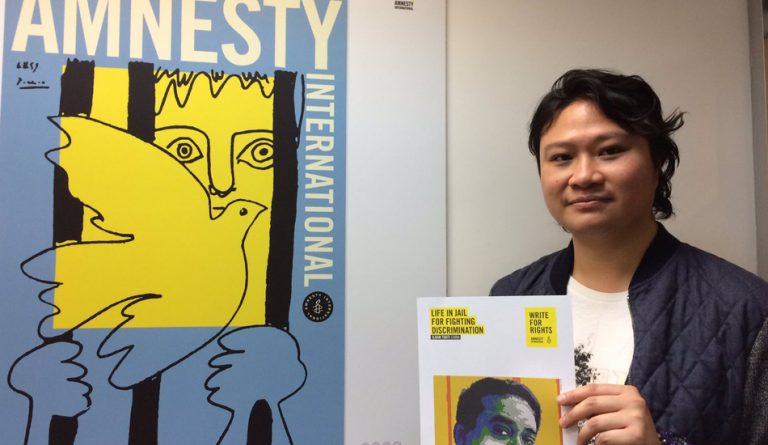 An art show that was supposed to take place in Hong Kong has been canceled after the organizers received threats from Chinese authorities. (Image: via Twitter)

No more freedom of expression in Hong Kong — an art show that was supposed to take place in Hong Kong has been canceled after the organizers received threats from Chinese authorities. The artist whose works were to be featured, Badiucao, is famous for his images that satirize the Chinese Communist Party’s political suppression and censorship.

“The decision follows threats made by the Chinese authorities relating to the artist,” said a statement on the news website, Hong Kong Free Press, one of the event organizers. “Whilst the organizer’s value freedom of expression, the safety of our partners remains a major concern… We regret having to make this decision, and hope there will be a chance for the public to see Badiucao’s work in the future,” the event organizers said in a statement (SBS News).

Born in Shanghai and raised in Australia, Badiucao has always been critical of the Communist rule in China. The show, Black Comedy for Hong Kong, China, and the World, was expected to display his satirical take on Chinese President Xi Jinping, his policies, and the repressive regime of the Communist Party. The popular democracy leader from Hong Kong, Joshua Wong, was critical of China’s interference in the art show.

“The fact that an artist is threatened due to a simple art exhibition which celebrates freedom of expression is an outrage, and I condemn any and all efforts made by the Chinese authorities to threaten and harm freedom fighters and democracy defenders in Hong Kong,” Wong tweeted.

Unlike the mainland, people of Hong Kong enjoy special freedoms because of the “One Country, Two Systems” rule adopted by Beijing. However, the Communist Party has been increasingly aggressive in bringing Hong Kong under its control, with authorities fiercely going after anyone who speaks against Xi’s policies.

“The threat Badiucao faces exemplify how much overseas Chinese dissidents need to consider when they do their work… It’s particularly worrying that it happens here in Hong Kong, as the space for freedom of expression is eroding further this year… The incident might make other dissidents and artists rethink whether it’s safe for them to do their work in Hong Kong, as they may also face similar situation in future,” Patrick Poon, Amnesty China researcher, said to Reuters.

The exhibition was to be the first solo event of Badicuo, whose real identity remains hidden. Hong Kong Free Press, Reporters Without Borders, and Amnesty International were the organizers of the art show.

The Communist Party is also expanding censorship of free speech to other countries, including the U.S., where a few Chinese students have reportedly been “warned” not to speak anything negative about China.

“We have a graduate student who told us about something that he discussed in a closed seminar at a university here, and two days later his parents got visited by the Ministry of Public Security in China asking why their kid had brought up these touchy topics that were embarrassing to China in a classroom in the U.S. So I think that that surveillance is real,” Sophie Richardson, the China Director for Human Rights Watch, said to Inside Higher Ed.

Some Chinese student groups are also said to be working hand in hand with Beijing to ensure the propagation of a pro-Chinese viewpoint, while also opposing anti-China speech at the same time.