Chinese Village Is Fighting to Reclaim a Stolen Buddhist Statue 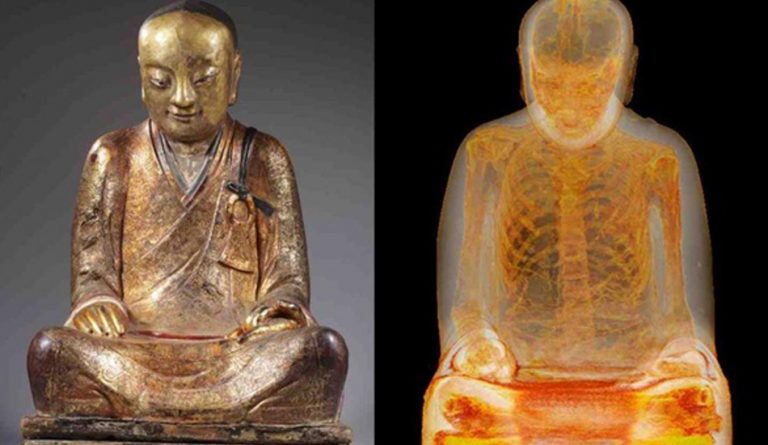 A CT scan shows a body, whose internal organs were removed, concealed in an ancient Chinese statue of a Buddha. (Image: via Drents Museum)

Villagers from Yangchun in China have pleaded to a Dutch Court for ownership of a 1000-year-old stolen Buddhist statue that it says is from their village. The idol is reportedly under the ownership of a Dutch collector, Oscar van Overeem.

“We grew up with the statue. He was there day and night. He is our spiritual leader. For us, it is the most important thing to have him back,” said Lin Wen Qing, the village spokesman, shortly after lawyers closed arguments at the Amsterdam District Court. (The Jakarta Post)

The Buddhist statue was stolen in late 1995 after centuries of worship by the villagers. Called the “Zhanggong Patriarch,” Oscar is accused to have bought the stolen idol in Hong Kong about two decades back. What makes the statue special to the villagers is that it contains the remains of an ancient monk who was mummified over a millennia ago, during the time of the Song Dynasty.

When a group of people from the village visited the “Mummy World Exhibition” at Budapest’s Natural History Museum in 2015, they identified the stolen statue and started legal procedures to get it back. If the verdict goes their way and the Dutch court accepts their right of ownership, it could mark the first time that a Chinese relic is retrieved through a European court.

However, Oscar claims in the court that he does not possess the statue right now. “I swapped the statue in a transaction [in 2015 to a Chinese collector]. I was happy to hear that it would go back to China.” (The Guardian)

The mystery of the statue

Carbon dating the statue has revealed that the monk inside had died between 1022 and 1155 B.C. He was in his thirties or forties at that time. “He obviously pined away; it might be his fasting near the end of his life to prepare for his mummification. Given that such an abscess develops slowly, the monk must have suffered excruciating recurring pains over a long period of time,” Erick Bruijn, an independent researcher on Tibet, Zen, and other aspects of esoteric Buddhism, according to Chinese Archaeology.

The monk, identified as Zhang Qisan, was a skillful doctor of the village who used to heal many patients. Known for his benevolence, the local populace is said to have survived a terrible plague from his efforts. This is one of the reasons why the villagers have been worshipping him for centuries. The statue has been renovated several times, with the most recent renovations taking place sometime between 1368 and 1644 CE during the Ming Dynasty.

“Inscriptions in classical Chinese on the linen scroll where the statue was seated indicated when and why the statue was renovated. The village head in Yangchun called on residents to donate money to renovate it in the hope that with a renovated Zhanggong, a declining population could be reversed, people would be happy, and a rich harvest in prospect,” according to Kaogu.

A ruling on the case is expected to take place on December 12, 2018. But with Oscar claiming that the idol had changed hands, it remains to be seen how the people of Yangchun will bring their sacred statue back to the village.