Despite Odds, Man Swims Around Britain for the First Time in History 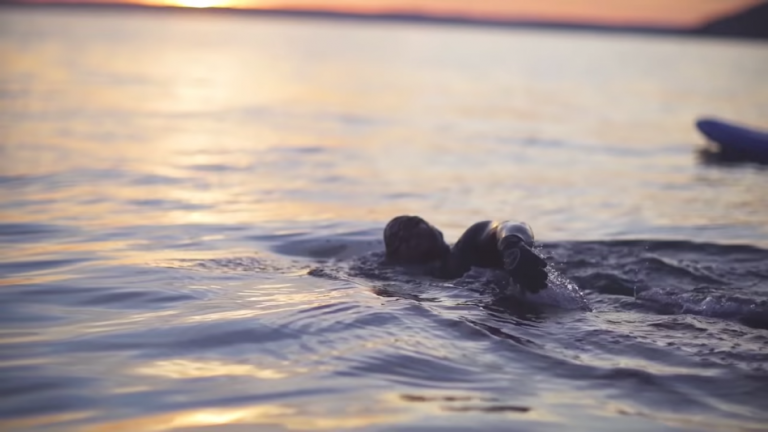 Ross Edgley from Grantham, Lincolnshire, has become the first man in history to swim around Britain. (Image: Screenshot via Youtube)

Ross Edgley from Grantham, Lincolnshire, has become the first man in history to swim around Britain. The 33-year-old adventurer, who started the journey from Margate on June 1, 2018, returned back to the starting point on November 4, after spending 157 days swimming the 1,780 miles of British coastline.

When Ross finally touched dry land after completing the feat, he had a whole bunch of admirers lined along the beach to greet him. “I got out of the water and thought this is gonna be amazing, I’ll run in like Baywatch… The reality is that I’m really chubby now, really hairy, and I had a pink tow buoy. When I made it to dry land, I was just relieved I didn’t fully fall over,” Edgley told The Guardian.

Though Ross had planned on completing the journey in about 100 days, it took him 57 additional days. On average, he swam about 11 miles per day. The previous world record for the longest staged sea swim was that of 74 days. However, Ross’ 157-day journey comfortably beat that and has extended the record by more than double.

The adventurer was also joined by around 300 swimmers during his last mile to the mainland. “This is amazing. There’s not many places you come in and people are asking you to sign bananas… The community around the whole swim has been amazing. People really got behind it. It felt like such a team sport — in no way was it a solo endeavor,” he said in a statement (Independent).

Two years ago, Ross made headlines after he completed a marathon while pulling a car. A couple of months later, he finished the longest rope climb in the world, one that was equal to the height of Mt. Everest.

Edgley’s challenge was, by no means, a simple affair. He had to go through several difficulties to achieve his goal. While swimming in the Gulf of Corryvreckan, a huge jellyfish attached itself to his face for about 30 minutes during which it repeatedly stung him. On some days, the wounds from constantly swimming in salt water were so severe that salt would stick on the bed sheets at night.

An interesting incident took place while swimming through the Bristol Channel when a female Mink Whale followed Ross for some time after mistaking him for an injured seal. Despite all the difficulties, what helped Edgley see through the feat was his indomitable spirit, something that was made clear in his interview with Red Bull before he went swimming.

“All going well, my challenge encourages people to do what they love and let Mother Nature take care of your physiology. It’s about being fit for purpose. From an esthetic perceptive, at the end of the race will my body get on the front of a fitness magazine? Probably not, but will it be a body that will help you swim around Great Britain? I hope so,” Ross had said to Red Bull.

As to his next challenge, Edgley joked that he wanted to “learn to walk again.” Given that he has not had a proper walk for several months, Ross will definitely need a few weeks before he is back walking like a normal human being.