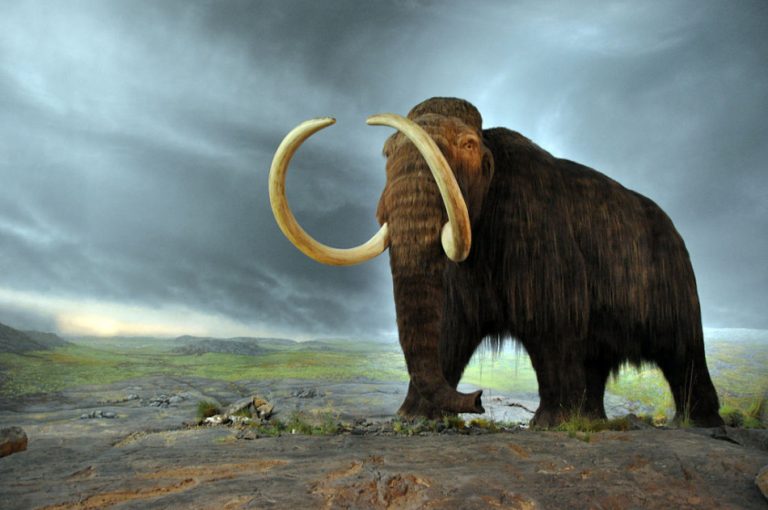 The extinction of woolly mammoths has been a hotly debated topic among scientists, with theories of asteroid collisions, diseases, and human hunting coming up as probable causes. (Image: Flying Puffin via Wikimedia Commons)

The extinction of woolly mammoths has been a hotly debated topic among scientists, with theories of asteroid collisions, diseases, and human hunting coming up as probable causes. A newly discovered crater in Greenland now gives credence to the idea that the mammoth extinction may have been brought about as a result of an asteroid collision.

Greenland crater may have led to mammoth extinction

The 19-mile-wide crater, found under the Hiawatha Glacier, was formed approximately 12,000 years ago when an asteroid 0.9 miles in diameter and weighing close to 12 tons smashed into the place. It caused significant ripple effects all across the region and may have led to the mammoth extinction.

“There would have been debris projected into the atmosphere that would affect the climate and the potential for melting a lot of ice, so there could have been a sudden freshwater influx into the Nares Strait between Canada and Greenland that would have affected the ocean flow in that whole region… The evidence indicates that the impact probably happened after the Greenland Ice Sheet formed, but the research team is still working on the precise dating,” John Paden, co-author of the study, said in an interview with News.Com.Au.

What is interesting about the new discovery is that the findings come eerily close to the Younger Dryas theory that explains the extinction of woolly mammoths. According to the theory, an asteroid crashed into North America about 11,000 to 13,000 years ago during the last ice age. This caused widespread fires, eventually resulting in the mammoth extinction in the Americas.

“I’d unequivocally predict that this crater is the same age as the Younger Dryas,” James Kennett, a marine geologist at the University of California and a proponent of the theory, said to Science.

Though the impact of the meteor was destructive, it can’t be compared to the carnage unleashed by the Chicxulub asteroid that struck Mexico about 66 million years ago, leaving a crater 93 miles in diameter. This apparently, according to science, caused the global extinction of dinosaurs.

The dino killer and global warming

When the Chicxulub asteroid smashed into Earth, it warmed the planet for 100,000 years. At first, the temperature rose sharply. Over the next decades, it plunged down as the dust and soot in the atmosphere blocked the sun. But later on, the carbon dioxide that was released by the impact soon began to heat up the Earth. And over the 100,000 year period, global temperatures rose by 9°F.

“If I were to draw a line under the lessons of this study for the modern era, it would be to contemplate the idea that what we are doing in our lifetimes will affect the Earth for the next 100,000 years, which is pretty daunting,” Kenneth MacLeod, a Professor of geological sciences at the University of Missouri and lead author of the study, said to Space.

MacLeod and his team confirmed the temperature change by checking fossil samples in Tunisia, a region that has the best-preserved fossil record prior to and after the Chicxulub impact.

With scientists warning of rising temperatures and climate change, a look into the Earth’s ecosystem during the 100,000 year period after the Chicxulub crash could definitely give us some indication as to the ecological changes we should expect. This should help us prepare better for the future.