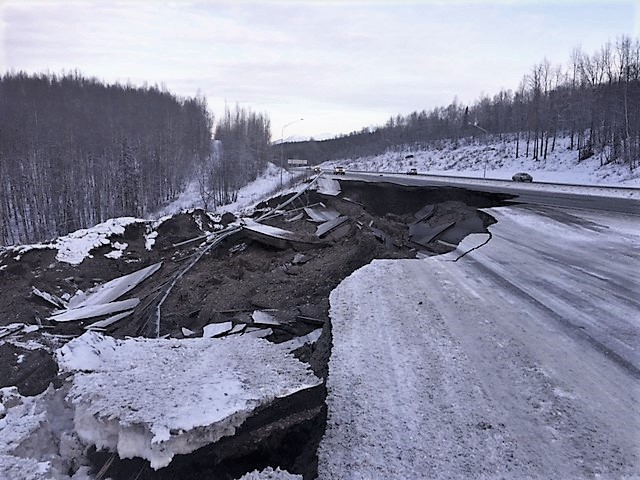 Earthquake damage to the Glenn Highway at Mirror Lake. Nov 3, 2002 (Image: via Wikipedia)

Videos have revealed the terrifying moment a major earthquake hit Alaska on November 30, 2018.

The center of the 7.0 magnitude earthquake was just north of Anchorage, a city of some 300,000 people.

The quake hit at 8:29 a.m. local time while it was still dark in the snow-covered state. Alaska has only six hours of daylight this time of the year.

Thankfully, there have been no reports of casualties, but immediately following the quake tens of thousands of people were without electricity or water.

The quake has caused considerable damage to buildings and infrastructure.

According to the U.S. Geological Survey (USGS), the quake occurred at a depth of 40.9 km.

There have been more than 230 aftershocks since the quake hit.

Many locals have posted online videos of the quake as it hit. See a collection of them below.

Another look at the intense shaking during the #AlaskaEarthquakepic.twitter.com/BEiVvQnpOK

Here’s how some kids at a school reacted:

@ktva this is the earth quake in anchorage Alaska pic.twitter.com/cWW9LCvYdx

Video drones have captured some of the devastation done to roads:

CCTV camera captured the moment the quake struck as one family was getting ready for their day:

Hope everyone is OK. This my wife, son & dogs inside during the #earthquake in Palmer, AK. I felt it in Fairbanks. Just broken stuff at our house. #Wyze pic.twitter.com/LMP7U5FJxR

It has caused chaos for businesses as well:

Earthquake hit Alaska along the Ring of Fire

Where the quake hit is along the so-called Ring of Fire and the USGS said that earthquakes are common in the region.

“Two of these — an M 6.6 earthquake in July 1983 and an M 6.4 event in September 1983 — were at a similarly shallow depth and caused damage in the region of Valdez,” stated the USGS on their website.

“The M 9.2 great Alaska earthquake of March 1964 was an interface thrust faulting earthquake that ruptured over several hundred kilometers between Anchorage and the Alaska-Aleutians trench, and to the southwest.”

The 1964 quake is the most powerful recorded earthquake in U.S. history. A tsunami created by the quake was responsible for most of the 139 deaths ascribed to the disaster.

For more footage on the recent earthquake, watch this NBC News video: