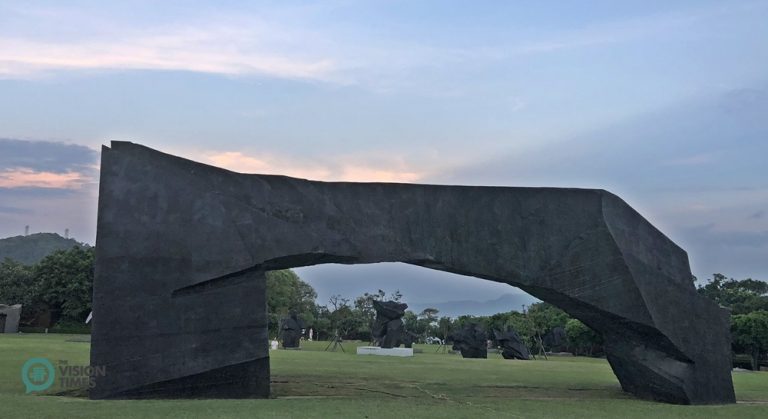 Covering an area of around 11 hectares (27 acres) in New Taipei City’s Jinshan District in northern Taiwan, Juming Museum is located on the top of a hill with a beautiful view of the Pacific Ocean and the small town in the distance.

Nearly 80 percent of the sculptures on display are concentrated in the three main areas of the vast outdoor exhibition space — the Taichi Plaza, the Living World Square, and the Sport Square.

These artworks can be categorized into three series — the Nativist Series (鄉土系列), the Taichi Series (太極系列), and the Living World Series (人間系列). Each series reflects the core values of Ju Ming’s optimistic attitude toward life and art.

Ju Ming’s Nativist Series portrays the artist’s admiration for rural characters, as he was born in a small town in northern Taiwan’s Miaili County. He also reinterprets traditional sculpture with his own creative artistic lexicon. It was his Nativist Series that first made him a famous artist in the 1970s.

About 30 pieces from Ju Ming’s Taichi Series are exhibited in the Taichi Plaza, and they are regarded as Ju Ming’s best and most famous works at the outdoor sculpture museum. Most of them are large-size bronze works made from foam molds. Their gigantic sizes and splendid shapes make visitors feel the magnificent strength of Taichi. The works from the Taichi Series have been exhibited in various countries and established Ju Ming as a great artist on the world stage.

The sculptures from the Living World Series are the works Ju Ming created for the outdoor sculpture museum after the Taichi Series. They are the sculptures portraying a variety of human lives based on Ju Ming’s acute observation of the mundane world. These sculptures are Ju Ming’s works created in recent years, and most of them are made of bronze from a sponge mold and stone. His Living World Series was first exhibited in New York’s Max Hutchinson Gallery and made quite a stir in the artistic circles in New York.

The pyramid-shaped Main Hall itself is a work of art, in which Ju Ming’s latest creation, Living World Series-Ballet (人間系列－芭蕾), and those from Dispositif: Extension of Ju Ming’s Exhibitions in Europe (部署─朱銘歐洲展覽的推進) are displayed. There are 29 pieces of stainless steel sculptures exhibited in this hall, and all of them are full of the strength and beauty of ballet dancing.

The Zipper Series features some of the zipper-related works created by Ju Jun, the eldest son of Ju Ming, who is also a famous sculptor in Taiwan. All the works displayed in the Ju Jun Area are quite impressive, such as the Zipper Tent, the Zipper Lotus Pond, and the Zipper Stone.

In fact, Juming Museum itself is Ju Ming’s largest artwork. In addition to the 2,000 plus pieces created or collected by him, Ju Ming also purchased the land and personally designed the architecture, landscape, wiring, and plumbing. It took Ju Ming about 12 years to complete the construction work. The outdoor sculpture museum has become a popular art park with beautiful scenery that is worth visiting.