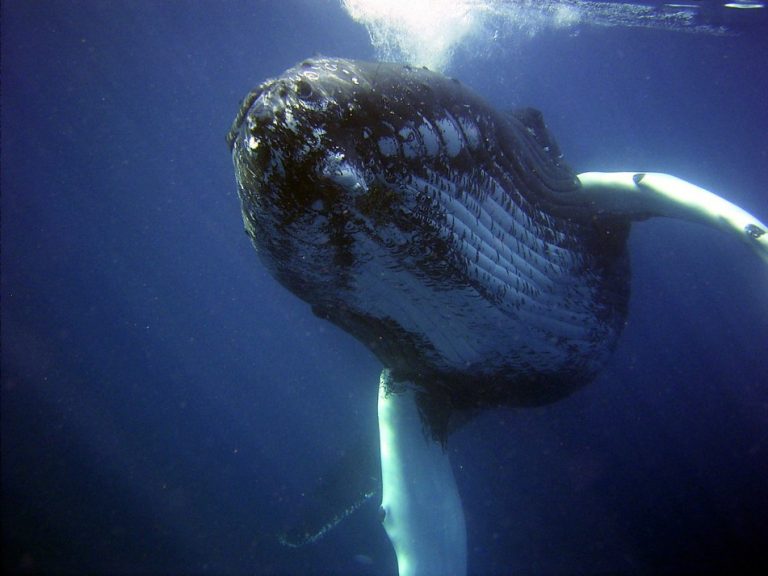 A whale, washed ashore in eastern Indonesia, surprised environmentalists when they discovered that the creature had 115 plastic cups in its stomach. (Image: 12019 via Pixabay)

A dead whale, washed ashore in eastern Indonesia, surprised environmentalists when they discovered that the creature had 115 plastic cups in its stomach. Four plastic bottles, 25 plastic bags, a nylon sack, and 1,000 other plastic items were also found inside. In total, about 13 pounds of plastic waste was recovered.

“Although we have not been able to deduce the cause of death, the facts that we see are truly awful,” Dwi Suprapti, marine species conservation coordinator at WWF-Indonesia, said in a statement (Fox5 San Diego). The whale was in an advanced state of decay when people discovered it, which is why marine activists were unable to determine whether it died from ingesting plastic.

Indonesia is one of the largest plastic polluters in the world, dumping an estimated 1.29 million tons of plastic in the ocean every year. The discovery of the dead whale has reignited the pollution debate. Environmental activists are asking the government to take immediate corrective steps before marine pollution becomes widespread.

“I’m so sad to hear this… It is possible that many other marine animals are also contaminated with plastic waste and this is very dangerous for our lives,” Luhut Binsar Pandjaitan, Coordinating Minister of Maritime Affairs, said to ABC News.

The Indonesian government has urged shops to stop providing plastic bags to customers. Regular awareness programs are also being conducted across schools. The government aims to cut plastic usage up to 70 percent by 2025. In nearby Thailand, a whale was found dead in June with 17 pounds of plastic waste in its stomach.

The menace of marine plastic pollution is not only affecting aquatic life, but it is also beginning to affect human beings. “More and more we’re starting to get concerned about the issue of microplastics, that are broken down into very small particles that get into the food chain and, potentially, into the seafood that we all love to consume. Plastic pollution in the ocean may not only impact oceanic creatures, but it may also have a significant impact on us as well. It’s an area with a lot more research needed,” Richard Leck, Head of Oceans at the WWF, said in an interview with Gizmodo.

As per the report from Ocean Conservancy and the McKinsey Center for Business and Environment, nearly 50 percent of plastic pollution originates from five countries — China, Indonesia, Thailand, the Philippines, and Vietnam. Cutting down plastic dumping by 65 percent in these countries would reduce global marine plastic pollution by 45 percent.

Almost 50 percent of all plastic ever produced has been manufactured after the year 2000. The booming global economy has not only brought financial prosperity to millions of people, but also led to a huge surge in plastic use. While earlier, people used to carry a tin or aluminum bottle for drinking water, today, they buy disposable plastic water bottles. This is unnecessary consumption.

Without immediate intervention, the amount of plastic that clutters the oceans could triple in just 10 years. And by 2050, experts predict that there could actually be more plastic than fish in the oceans. This would be a catastrophic development that has the potential to upset the entire food chain of the planet.