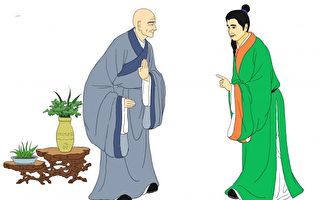 The idiom dé gāo wàng zhòng refers to a person of high morality and prestige. (Image: via The Epoch Times)

The Chinese idiom dé gāo wàng zhòng refers to a person of high morality and prestige. It is often used to praise the elderly, much as we would compliment someone in English by saying: “You’re a saint.” Here is the story of the man who inspired the idiom.

Fu-bi, also known as Yan-guo, was from Luoyang, a city near the Yellow River. He lived during the time of the Northern Song Dynasty. From a young age, he was diligent in his studies and became very knowledgeable. Fu-bi was open-minded and tolerant, with an extraordinary spirit. At the time, there was a senior person who saw him and praised him saying: “This is a man of superior ability who will assist an emperor!”.

At the age of 26, Fu-bi began his career as an official. Over the 40 years of his career, he was loyal to the country. In dealing with diplomats, border defense, surveillance of prisons, helping victims, and other matters, he became remarkably accomplished. He was constantly promoted and successively served as a prime minister for Emperor Renzong, Emperor Yingzong, and Emperor Shenzong. He became a famous official, one whom emperors would heavily rely on andhe was respected by numerous government officials.

In the second year of Emperor Renzong’s reign (A.D. 1042), the Khitan State to the north stationed troops at the border demanding that the Song Dynasty cede the large territory south of the mountain pass. The royal court ordered Fu-bi to go to the enemy camps and negotiate. In the negotiations, Fu-bi was not concerned with his personal safety and assertively presented his views, successfully protecting the country’s interests. He twice successively received orders to go as an envoy. The first time when he was on his way to his post, his daughter died from an illness. The second time on the road, he heard that his son had been born, but he never once went home for a visit. To reward him for his achievements, the court conferred on him many important positions, but he humbly declined time and again, unwilling to take the positions.

In the 8th year of Emperor Renzong’s reign (A.D. 1048), the Yellow River burst from its banks at Shanghu and became a natural disaster as the flood waters began to rise. At the time, Fu-bi suffered from malicious rumors spread by the enemy and was demoted to a post in Qingzhou. He cleared out more than 100,000 public and private houses to be shared among the victims of the flood. He then posted a notice to ask for the locals’ help in collecting food. Together with the addition of all the food stored in government storehouses, the food was dispersed around the area. The streets were full of praise. The emperor specially sent a messenger to bring gifts and appointed him to Vice President of the Board of Rites. Fu-bi however politely refused, saying: “This is an obligation I, as your servant, should uphold.”

Fu-bi was respectful and amiable toward others, even after becoming prime minister. He was never prideful as a person. No matter if he was visited by a lower-ranking official or an ordinary citizen, he would treat them with equal etiquette. When Fu-bi grew old, he retired and lived for a long time in seclusion in Luoyang. Sima Guang praised him saying: “An official who served three emperors, of noble character and high prestige.”